N.B. As of November 2019, there is now a more comprehensive article about L119A2 parts and accessories

It’s been observed that there are two distinct variants of the L119A2 in use with UKSF.

They are popularly defined by their uppers, although the differences between the two concern the kit-out of the lower as well:

The following basic package is thought to be shared by both the Partial RIS “IUR” and the Full RIS “Alternative IUR” versions of the L119A2:

While the Full RIS ‘Alternative IUR’ exhibits the LMT patent number, the Partial RIS ‘IUR’ is said to be shipped blank. It apparently is subsequently engraved with the lower’s serial number (in full or part) by UKSF armourers.

The format displayed on the white laser etched examples appears to be the full serial, which is a concatenation of:

The L119A2 exhibits a NATO Stock Number – or NSN – on the right hand side of the mag well (although this is sometimes lacking in newer pics).

In the above pic we can just about make out an NSN which exhibits this string:

According to the table below – from the L119A2 PAM – which was publicly posted on Facebook, the string ending 98 corresponds with the 15.7” model.

However, at this date I would be inclined to use the 98 number on a replica lower for either length upper. This is because, so far, I have only seen lowers with NSN markings ending 98 – regardless of upper.

The 99 lower may well be out there, or the NSN could have been created and never used. Time will tell (or we may never know).

Also note that 16” (as related above) is an approximation, not the defined length of the rifle length IUR’s barrel (which is 15.7″).

There is no documentary evidence that I know of which suggests a different length for the SBR version of the IUR, so this is always taken to be 10″.

In the wild, some older L119A2 charging handles have had their existing latches cut down.

However, it was confirmed in September 2020 that newly issued A2s feature a shorter version of the latch. Read more.

Similarly it was revealed in September 2020 that the ASAP is indented with a punch, as a receiver extension nut anti-rotation measure. Read more.

The L119A2 exhibits a monolithic upper, meaning that the rail and upper receiver are conjoined in one continuous unit. It is referred to as IUR – which means Integrated Upper Receiver.

In 2016, I pointed out that  LMT owns the patent on monolithic uppers and that they successfully prevented Mega Arms from marketing their own one-piece upper.

It later became apparent that Colt Canada had officially licensed the monolithic upper receiver design from LMT, as evidenced by the US Patent number shown on the Partial RIS ‘Alternative IUR’ L119A2.

The pic below – from The Sun newspaper in May 2016 – was the one which absolutely confirmed that the L119A2 was in use with UKSF. The pic is from Exercise Winchester Accord.

The following images are legacy screenshots from Colt Canada’s website, which were used at the time to cross-reference with the Winchester Accord pic, in order to better understand the parts composition of the L119A2.

Needless to say, additional information has come to light in the past few years. 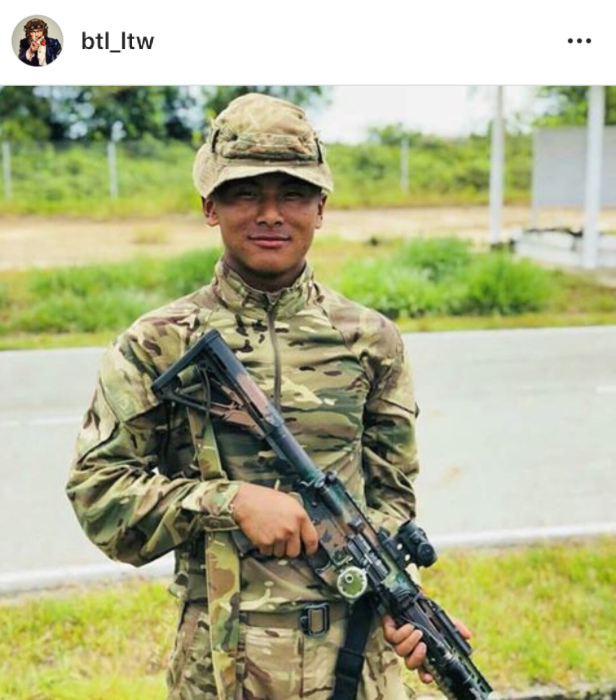 Since May 2016 when this article was originally published, I’ve done my best to keep it refreshed with L119A2 updates. I’ve learned about these through my own research and from the research of friends (often with legit contacts).

However, since most enthusiasts aren’t particularly interested in the Full RIS ‘Alternative IUR’, this article has for the most part been superseded by:

Big thanks to Jay Taranis for his help in the earliest stages of this article’s evolution.