A while back, John Danter pointed out something I’d missed in the Manchester incident pics: what he assessed to be a Crye Precision Side-Pull Mag Pouch:

He reminded me about it today when he spotted this video on Instagram, courtesy of @specialforces.atw:

(Email followers will need to click through to the blog to see the video).

You can see the pouch in question bouncing around as the figure walks, which for me shows that it’s not part of the zip-on panel pack.

We all know that Crye’s solutions are creative, but sometimes their products are also incredibly niche. One such item is their Side-Pull Mag Pouch:

It’s not an item with a million imitators. Tyr does something similar, but the design isn’t unashamedly borrowed as often as one of Crye’s core products like the JPC.

The first time I considered buying this pouch was after a conversation with perr_mike, one of the last surviving godfathers of the UKSF impression scene. 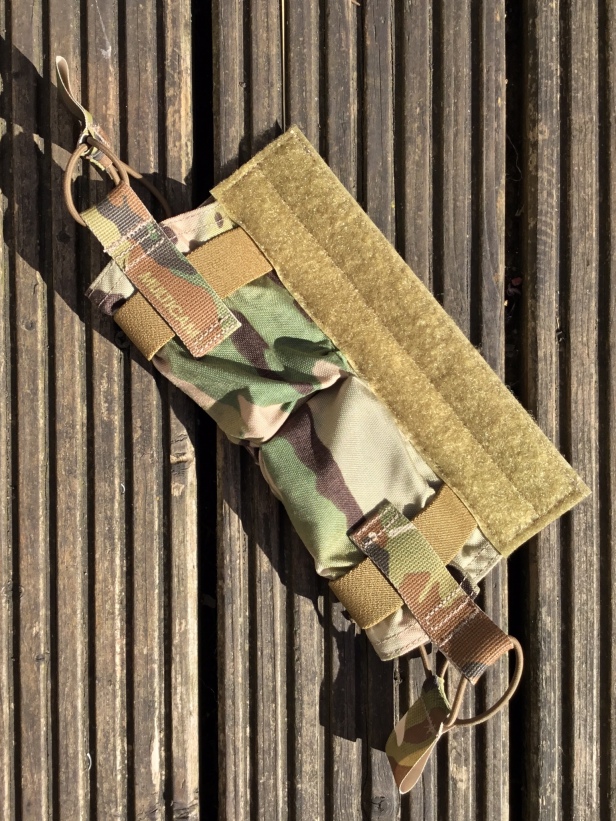 Interestingly, the pouch can be deployed at the rear of a PC or at the front. In both cases it attaches to the base of the plate bag, utilising the velcro mating surfaces therein.

The pouch’s backer is stiffened, which prevents it moving as the user ambulates. It’s also slightly concave, so that when it’s applied to the curve of a plate, it doesn’t pucker. A clever touch.

Mags are retained using bungees, but the pouch’s mouths also exhibit elastic. Upon first use this makes reindexing difficult, but leave a couple of mags in situ for a while and it loosens up.

One face of the pouch exhibits a PALS daisy chain, upon which items can be piggybacked. 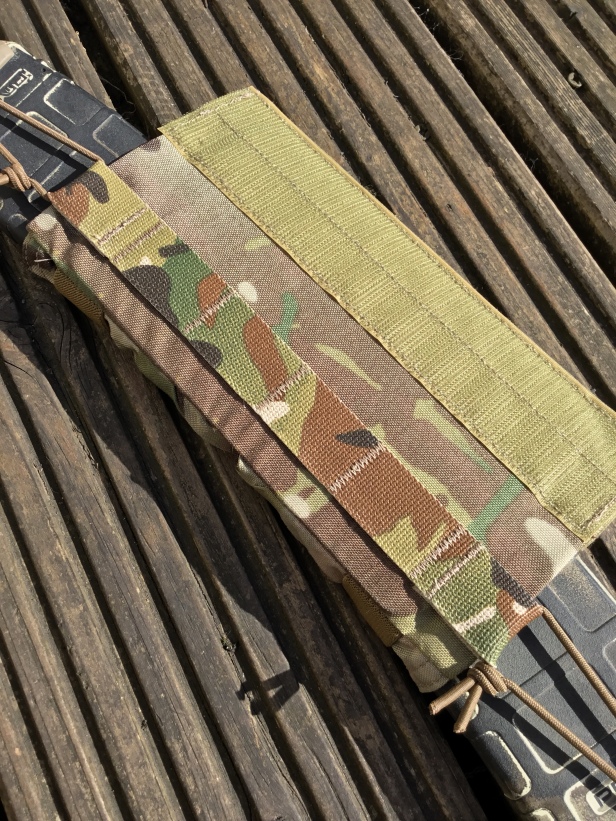 My experience with the pouch; and the subsequent kydex hack

While drawing mags wasn’t a problem, I found it difficult to return them to the pouch after use.

The main issue for me is the mouth of the pouch. It really needs some form of reinforcement to keep it open and receptive.

Crye has rectified the matter on its Zip-On Pack 2.0 – which I had hands on with recently – but the problem remains with the standalone Side-Pull Pouch product. 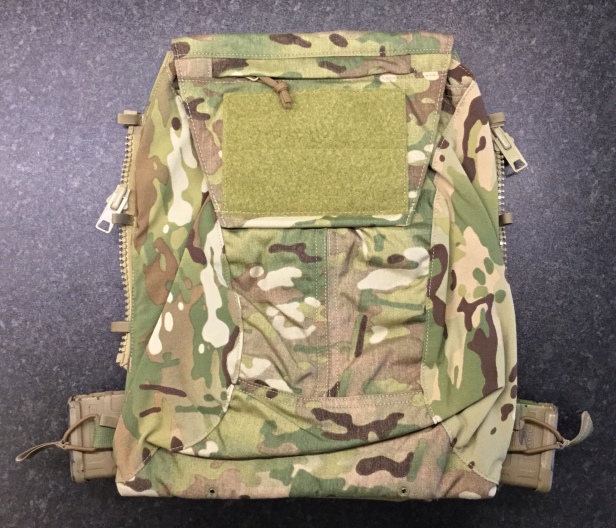 It struck me that to make the Side-Pull Pouch work at the rear of my AVS, I had three realistic options:

I chose the latter and I’m not the first. John Danter did something similar with Tyr’s version of the Side-Pull Mag pouch (which is actually a whole lot easier to hack, he tells me, because the mag compartments are bigger – though he’s now changed to the Crye Zip-On Pack 2.0).

First I got rid of the bungees. These just get in the way.

Next I stretched both compartments of the Side-Pull Mag Pouch, over a number of days. I did this by keeping the mags in situ and wedging MALICE Clips down all four sides (finally a use for MALICE Clips).

Meanwhile, I repurposed a couple of Predator Gear Kydex inserts I had laying about.

The result isn’t pretty, but it works. There’s plenty of time to commission a pro version once the proof of concept is done.

The aim of reshaping the Kydex was to form a wide mouth which stops the compartment collapsing.

I also needed to take as much of the usual hourglass shape out of the Kydex. The Side-Pull Mag Pouch compartments are so tight that the Kydex needs to exert very little mechanical grip on the mags.

So, the object became about relaxing the Kydex sufficiently. It is still retained by the compartment and its elastic, so it doesn’t fall out when the mag is drawn.

Kydex is a thermoplastic so responds well to heat. A hot hairdryer or mini blowtorch can be used to reshape it. 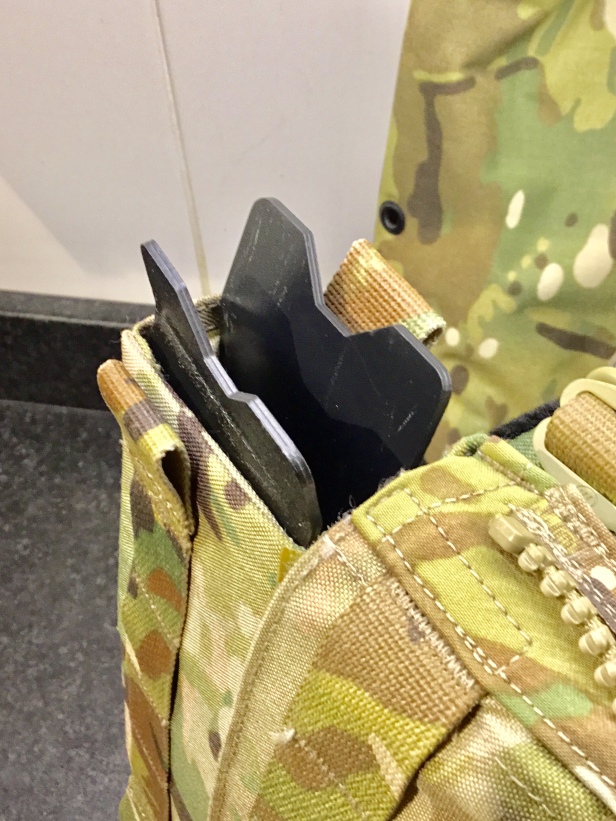 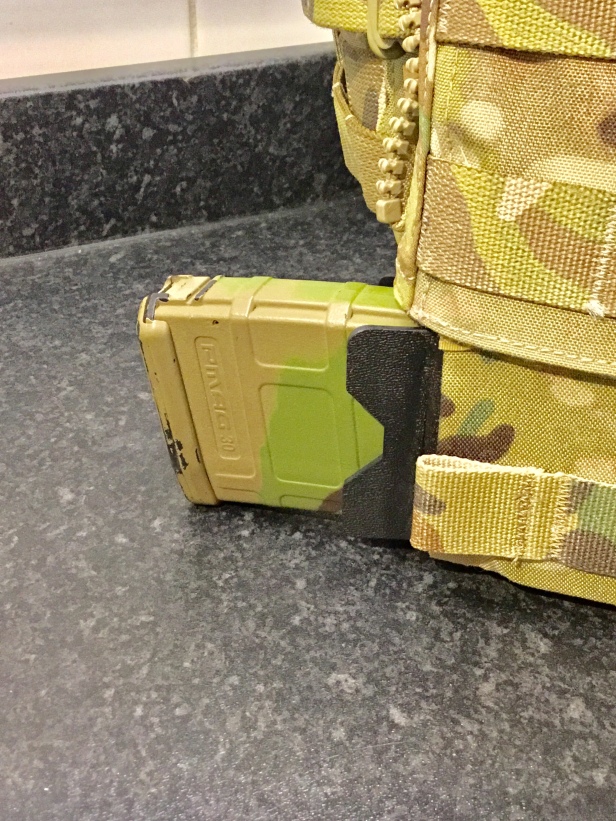 It took a few goes to work out what was best for me in terms of Kydex size and shape. I settled on allowing the Kydex to protrude way beyond the pouch compartment. This makes it easier for me to guide the mags back in.

Mags are now really easy to draw and much easier to reindex.

Having said that, these rear mounted mags are for emergencies only. After use they go into my Crye Roll-Up Dump Pouch and are reindexed using both hands when there’s a decent pause. 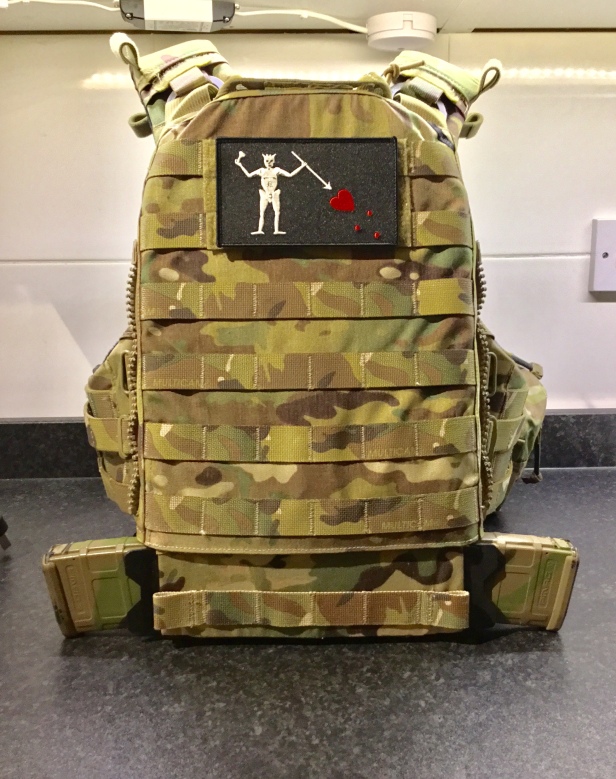 Want more Crye reviews? You can find a whole list of them here. The list is updated as more reviews are published.