It’s 2019 and the UKSF impression scene is absolutely buzzing.

It wasn’t always this way. In recent years it has grown exponentially, from its solid roots as a niche club. Some of the guys from back then are still around and have helped guide the scene to where it is today. However, the biggest catalyst has been external.

Talking with T42, it’s clear that aside from the early influence of some well known movers and shakers, what galvanised them was the modernisation of UKSF equipment and gear. Add to that a slew of instantly iconic reference photos and corresponding impressions are now more accessible, more popular, and arguably cooler than ever.

The upshot of all this is that the expanding scene is now extensive and diverse; with multiple narratives, multiple rule-sets and multiple influencers – who, it has to be said, sometimes hold opposing views. It’s also a scene with exacting standards, which requires a high burden of proof to rationalise gear choices – even at the most granular level.

Reading back the interview with T42, I get the sense of a confident, vibrant team which – while it was initially shaped by the modern scene – has developed and focused to a point whereby it follows its own star.

And, they may not admit it, but they’ve become increasingly influential in the scene. Through their analysis and interpretation of reference pics, gucci kit choices and well observed RIFs, they are building a strong and instantly recognisable brand.

Have a read of the interview and find out more about this exciting UKSF impression team. 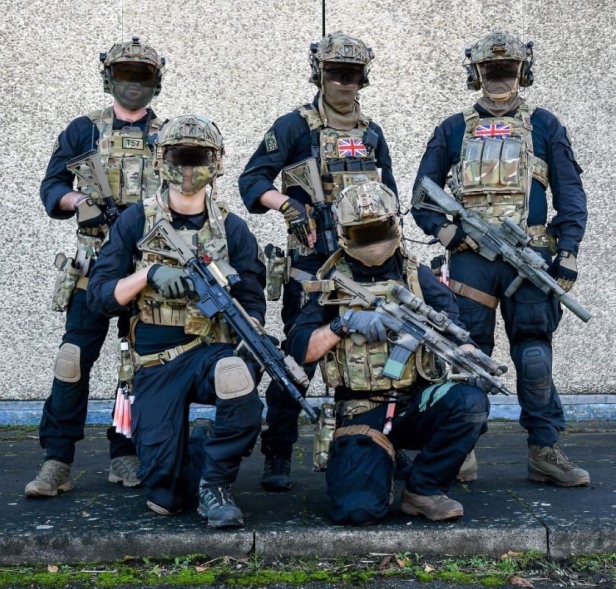 Welcome to the blog chaps! Tell me about T42

T42 started as a four man call sign, conceived to undertake the realsim events run by ITAS. The team has seen exceptional growth over the last year and we now have eleven members – although we’re yet to hit an event with the entire team. Our members are spread out across the UK, mostly Northern based but some in the South West.

As for the team name, it came from an in joke about ordering ‘tea for two for one’. We liked the joke and shortened it to ‘tea for two’ – or ‘tango four two’ when we’re on our best behaviour.

Currently the team is composed of assaulters (mostly) but a number of guys have opted to specialise for events, including: signals – handled by our resident communications expert and entrepreneur, JC; breacher – handled by a serving fire fighter; and medic – handled by a medically qualified currently serving soldier. All specialist roles within the team are ones the guys have picked themselves and have spent time, money and dedication fulfilling.

Outside of the events the team is essentially a democracy. Everyone gets a say in how things are run and what’s going on. For the events we have a semblance of a structure: a section leader who is the single point of contact with any directing staff, and a team leader who – with the section leader – will each run a fire team, depending on numbers deployed.

We have a big group chat that is 95% banter, 4% nonsense and 1% useful. Due to work commitments, not all of the guys are around all day so it’s a case of catching up as and when. Members are invited in to the team, normally after a group chat. 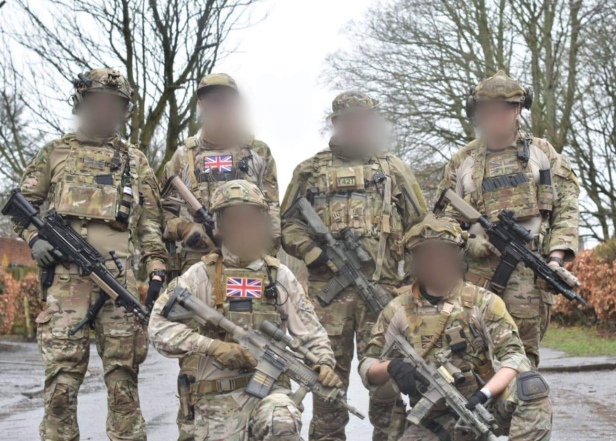 T42’s loadouts are on point. How did your standards develop?

Thanks for that! We do try and keep the team standards high. As a collective we have decided roughly what era and timeframe the kits are based on, but as you can see from the team IG and our individual IG pages, those kits are constantly evolving in line with the newest UKSF reference photos.

There are some obvious themes running through the team. We all run a Glock of some description in a Safariland holster; black Cryes are still in use – inspired by the Manchester incident – although rarely now; maritime lids; buddy bang pouches on rear plate; weighted plates; and BFG Micro IFAKs – all are very common items in the team.

Beyond that, the team is slowly moving towards using the Crye AVS as its plate carrier of choice – though there is still a C2Rmor Lite and a JPC 2.0 in use. The greater the diversity in emerging reference pics, the more our kits will morph and change. Having said that, there is a certain amount of organic creativity at work – though always inspired and constrained by reference pics.

All of our impressions use a certain amount of repro gear: lids, weapon lights and optics being prime examples. Some of the Safarilands are repros, as are certain pouches and even entire rigs (thanks to TMC for making an excellent AVS repro). However, we try to use the real stuff where at all possible and often repro kit merely acts as a placeholder – or just to see if something works.

Finding kit that not only works but looks good – especially when there is so much new material entering the UKSF impression scene via reference pics – is a never ending journey. It’s also rather tricky to create a ‘different’ or niche kit when there is only so much you can do within the realms of plausibility. To that extent there is definitely a degree of natural standardisation within T42.

But, it’s not only about looking cool as the Final Encore series of events has taught us. It’s also about being able to function effectively in all your cool kit. 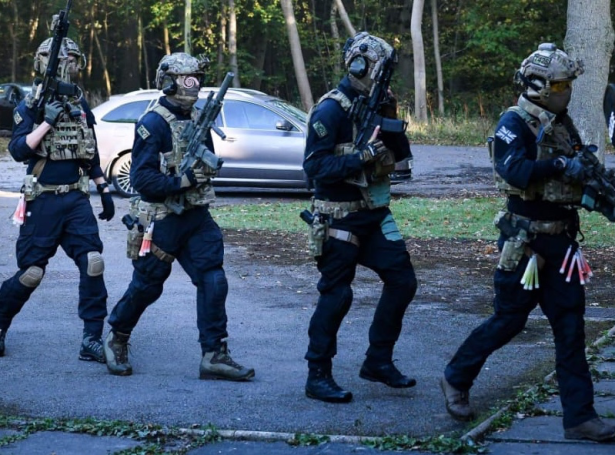 We would be lying if we said we weren’t inspired in part by the E27 impression group.

The first Final Encore write up for The Reptile House by Jay Taranis certainly piqued the interest of many in the team.

The black Cryes, the Multicam plate carriers; the flexibility of the kit and the brands were all a breath of fresh air when compared to Russian and US impression kits (our specialist ATO – T42S – had run a Russian MVD kit, and T42J had a 2011 DEVGRU kit prior to moving over to UKSF – although both have been part of the UKSF scene for years).

Gaz Perkins also deserves massive credit for pulling together the Final Encore series of events. It can’t be easy briefing a room of sleep-deprived airsofters at the end of the weekend (not unlike herding cats).

Lastly, there is also a point to be made about custom made kit. Flimmuur, Morion Threadworks, Mael Eoin Tactical, FRV Tailoring and JCI Comms all feature heavily in our kits. They satisfy very specific needs within the group for a fraction of the cost, replacing equipment, pouches and other nylon items that often do not entirely fit the intended purpose.

To many, the black coveralls and magazine-strapped assault vests redolent of the Iranian Embassy Siege spring to mind whenever the SAS is mentioned. So, imagine our collective surprise when pics from 2016’s Exercise Winchester Accord came to light – as featured in the very first Reptile House “In the Wild: L119A2” article.

Therein was one of the first truly modern UKSF kits in glorious HD – and on home soil:

This iconic image piqued the interest of a lot of the lads in the team. Notwithstanding, the steady stream of further reference pics from Manchester, Merseyside, London, Syria, Newcastle and now Nairobi has done wonders for the modern UKSF impression scene; with people able to pick and choose what they like the look of across multiple pictures and settings.

It also helps that the kit is accessible enough – with repros and second hand kit readily available – yet just niche enough to be distinguishable from US kit and that of other SF.

Particularly salient are pieces of kit from C2R out of Hereford and – of course – the iconic and instantly recognisable 10″ and 15.7″ versions of the L119A2.

All that being said, who doesn’t support the home team?

Everyone in T42 has a certain affinity for the British military and for the U.K. as a country. It doesn’t even always have to be about patriotism; it could simply be just because the kit looks so cool (and when isn’t black Crye uniform and Multicam nylon cool?)

What primaries are you guys using?

We are hoping to expand on the team’s armoury over the next year, with more support guns, DMR/sharpshooter rifles and long L119A2 uppers for greenside work.

The team used to be focused on the GHK but is now seeing a move towards TM Recoil based rifles.

These seem to strike the perfect balance between realism for the realsim events, utility for your weekend skirmishes and the flexibility for even the most demanding of milsims.

Brands like VFC, WE and TM are used for our G19 pistols; although we have a couple of TM and WE G17s in use also.

As mentioned, there is a marked preference within the group towards the L119A2.

It’s a newer and more ergonomic rifle, with the Ergo pistol grip, slick conjoined handguard and more modern pressure switches. It is a far more intuitive platform to use on the fly; plus it looks mean when kitted up and sprayed down.

Many members also own A1 variants, whether for skirmishes, nostalgia or for older kits.

What are T42’s future plans?

Our future plans involve more events, with all eleven of us attending – because so far we haven’t fielded the entire team at one single event. The team also plans to attend more milsim events – as well as the realsim ones – to build cohesion.

It’s also entirely possible that there will be an expansion and evolution of kit as more money and reference pics become available. We’ll also be consolidating the kit we have and making it all work as well as possible.

There is also the development of an insignia in the near future.

Currently there are no plans to expand the team further and we have thankfully never had to remove anyone. 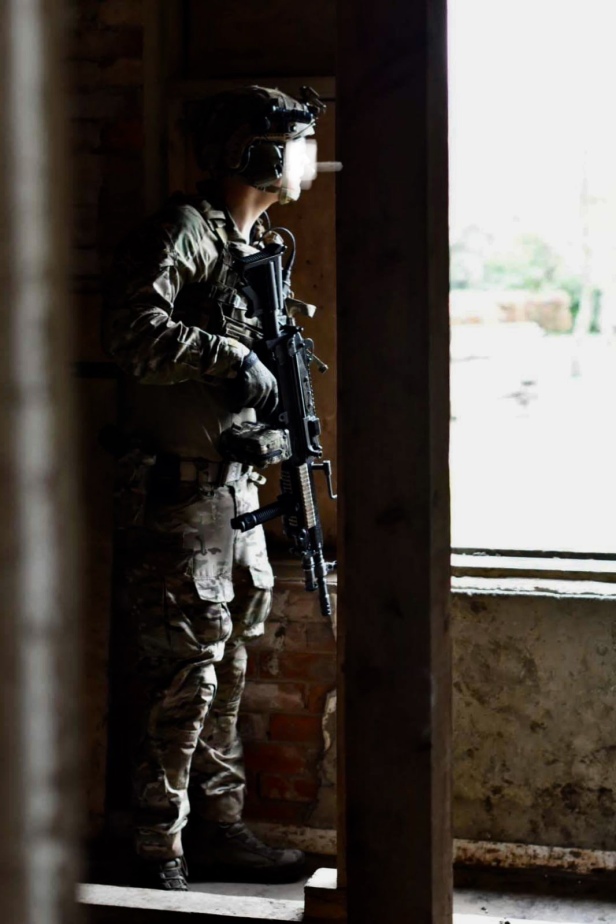