The Concept
HTIS Exercise Final Encore was not an ‘Op’ in the same vein as most milsim events. It was alternatively conceptualised as a training event. In some ways it was inspired by the recent real public counter terror drills for military and blue-light services; most notable of these, London’s Operation Strong Tower and Greater Manchester’s Exercise Winchester Accord. In much the same way the real exercises were conducted, Final Encore used crisis actors as hostages with a variety of simulated injuries. OpFor was played by staff, and those in attendance made up the counter terrorist (CT) assault element. 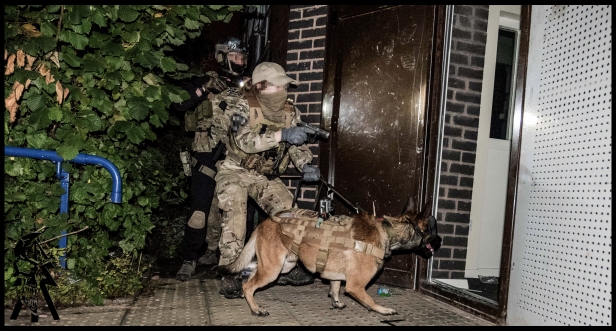 The OpFor did not have an objective by which they could ‘win’, beyond making the assault difficult for the CT element. Five or six ‘terrorists’ holding hostages were countered by a 26-strong assault force. This ratio represented the overwhelming force which would be deployed in a real scenario. The event was carefully choreographed where required, to ensure immersion and safety while allowing the assault element a degree of latitude in conducting the assault. This planning and the nature of the event allowed the use of actors, a trained K9, and method of entry (MOE) techniques which would be almost impossible to deliver practically and safely at an airsoft skirmish.

The Event
The event began with a rendezvous at a car park near the site, which was an abandoned retirement home. A good choice, since its circulation and layout was reminiscent of a home. The original venue had been pulled by the landlord a matter of days before the event, so the last minute rearranging and rearticulating of the event was testament to the efforts of the staff. If I hadn’t been told, I wouldn’t have detected that the event wasn’t initially planned for the final site.

Following a quick brief, we had a chance to sort ourselves into our assault teams. These were broadly based on groups who were attending together. We then kitted-up and undertook the training and practice element.

In a real scenario, there would of course be no opportunity to practice-run on location. However, there would potentially be a longer planning phase, use of mock ups, detailed floor plans and vastly better trained and able assaulters. The practice runs were useful, to allow the eventual assault to be smooth and thus fast.

Working together, both within our teams and across teams, we devised plans. We ran through these as dry runs, to establish our initial movements post-entry, and worked on more general, flexible tactics for clearing the building. Around four hours was allocated to this section, although it absolutely flew by, before we had to vacate the site and move to the staging area so the actors could arrive and set up. We identified issues in the timing of team movements to ensure stairwells were secured, established the Limits of Exploitation for the various teams and worked on any issues which arose in trial and error practices.

We also identified issues with kit. Narrow corridors and snag hazards ensured belt kits were tweaked, to guarantee we could move past each other. We also identified the need for a shield man, at two of the corridor junctions.

During this time the assault team I was part of undertook an exercise in covert close target reconnaissance (CTR) both on foot and vehicle-borne. We observed a meet, examined a target vehicle and trailed it back to the site. This again taught us a number of basic strategies for surveillance. I am under no illusions that we completed this segment in a rudimentary way, but it was both interesting and fun – and we certainly learnt the limitations of our comms equipment and surveillance strategies.

Once the CTR exercise was complete, we returned to the staging area for the final assault rotations. Having kitted-up we were given the briefing on the assault phase, outlining the operation, safety measures and how the initial entry would be effected and played out. The assault phase started with the firing of blanks to simulate the attack, before the order to go was given and the assault teams moved in. The assault was led by the K9: Kairo the Malinois (eyepro-ed up) and his handler. They were followed by Assault Team 1. After the initial entry into the building, now pitch black, Kairo encountered the first ‘terrorist’. Lit up by the Surefires of the first assault team and painted with lasers, Kairo was released to streak toward his target. After the fur missile had taken down the first enemy (bite sleeve first), he was pulled aside and away to allow the teams to advance, with weapons and bangs then in use.

The assault then commenced with rooms being cleared rapidly. The cries of help from hostages, flashes and beams from lasers and torches and the reverberations of flash bangs fed into an immersion which was unlike anything I’ve ever encountered. My team moved efficiently down the corridors, clearing rooms as we went. We came across our first almost uncontrollably panicked hostage before we encountered our first opposition – now armed with GBB AKs. Within moments of kicking the door open and crashing in, the ‘terrorist’ we found was down and marked with a red chem light. The assault moved on.

Hostages were located and assessed as we went, then passed back toward the safe areas of the building. Each engagement lasted moments between room checks, then the assault teams linked up and the building was called clear. Hostages were checked, treated for the simulated (yet very convincing and bloody) injuries they displayed, before ‘Endex’ was called. This did not come before one of the enemy, masquerading as a hostage, had shot two assaulters unawares.

Returning to the staging area the hostages and ‘terrorists’ retook their positions while we undertook a rapid debrief; establishing that hostages needed to be better handled and checked for weapons, and safe areas more thoroughly marked with Cyalumes.

The next rotation saw a repeat, although hostage and opposition forces had taken up new positions, and yet more lessons were learned. The third and final rotation saw a more prolonged treatment of ‘survivors’ in the staging area, to allow for assessment and treatment of simulated wounds.

Reflection
The event was like nothing I had ever experienced. In all, I had two engagements over the course of three rotations, fired about 15 rounds, and got one kill. I know several of the assaulters barely fired their weapons at all, but I rank it amongst my very best experiences in the hobby. The event truly stands apart as the most unique and immersive, with a huge adrenaline buzz.

The training was engaging and interesting and really valuable not only in improving our tactics and decisions, but also in gelling a group of people who hadn’t played as a team before. By the end we felt like a decent unit, with any remaining ice broken.

The assault itself was visceral. The darkness, scenario, K9, and a setting where we could boot down doors (and in some cases shred with MOE tools) made it hugely evocative. The suspension of disbelief was something else. Multiple rotations ensured that those who undertook important roles like securing stairwells, or had simply cleared a succession of empty rooms, could be at the sharp end next time. It allowed teams to work on their tactics between runs.

The chaotic nature of the assault very much drove home that tactics and kit choices might not work with near zero light and the need for speed; regardless of them working in more relaxed conditions.

A huge part of what made the event were the crisis actors. They were excellent throughout. They never let up, acted their parts to perfection and took being screamed at, hauled out of rooms and down stairs, cuffed, searched, or in one unfortunate case being shot, with a positive attitude and with dedication.

If you turn up wanting a good CQB dust up you will be disappointed by an event like Final Encore. As one of my fellow assaulters opined afterward, it was “barely airsoft.” The event utilised airsoft weapons and the norms of airsoft safety. However, in terms of structure, depth and ‘gameplay’ it defied almost every other convention. Having eschewed these, an event was built which was staggeringly good fun in a very different way to the skirmishes we all enjoy. It has already got me re-evaluating kit choices and tactics in readiness for the next one.

I think the term ‘realsim’ can comfortably be applied to the event. Really, the only thing which detracted from it for me were a couple of kits which stood out as being a tad ‘skirmish day’. And that’s being hyper-critical. There were a few kit rules in place, although obviously it is difficult for organisers to police fairly and effectively. If you ever want an incentive to increase the realism in both gear choices and your personal setup, though, I can think of no better way than an event like this.

No date has been set for another in the series. The ideas being discussed are exciting, however, and I fully expect any future event to be as good as or even better than Final Encore.

Credit for photography at the event including the pictures within this article, which was undertaken very discretely, goes to Snook Snaps.