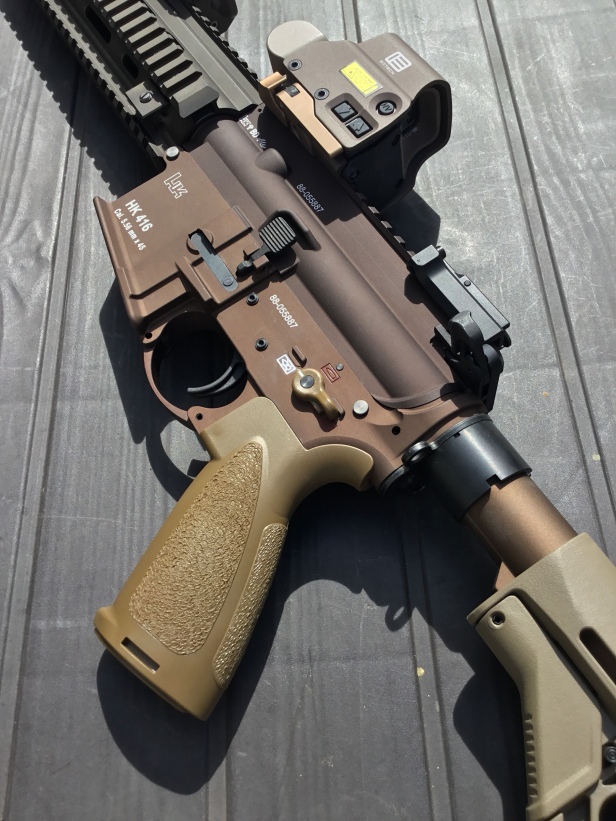 Having given my first impressions of HAO’s stunning HK416A5 and then – as requested by readers – done a quick video pass over it, I thought I’d take some time to look at the details which have piqued my interest.

Remember, I’m viewing the A5 through the lens of having owned SGT’s mighty HK416D. Those are very big shoes to fill, especially at HAO’s significantly lower price point.

Substantively, SGT’s HK416D upper was a work of art. Rail notwithstanding (it was an adequate but inaccurate VFC placeholder), it is yet to be bettered.

However, the Achilles heel of SGT’s kit was in its lower receiver.

It was not CNC’d to the correct depth at the base of the gearbox, towards the front of its footprint. This meant that the gearbox wasn’t as well supported as it should have been. It also meant the gearbox was not square with the top of the lower receiver, creating a poor mesh with the cylinder – if left unchecked.

In fairness to SGT, the company supplied a custom height washer which helped correct the issue, but it wasn’t the best fix. Nevertheless, Tackleberry was able to rectify the problem with a more robust solution. To be perfectly honest, once fixed it worked perfectly.

If SGT had ever moved beyond that version, its product may we’ll have been unassailable; but it’s testament to HAO’s engineering know how that structural problems are not part of their current 416 design lexicon.

This caught your eye too, right?

Today was an important one in A5 terms because HAO had rushed me a new ambidextrous mag catch, to replace the off spec one included with the kit.

Big thanks to Bismarck and Miguel – it works perfectly and serves to underline HAO’s honesty and integrity: admit the mistake, provide a solution, move on.

Makes me wish I was left handed:

Lots more pics now, plus a few words pointing out some of the A5’s salient features.

A decent steel bird cage flash hider with RS imperial thread. Could be a ballache for those who wish to swap this out; especially in countries where flash suppression devices are illegal (e.g. U.K.).

However, if like me you’re trying to get as close as possible to the ‘from the factory’ look, it’s a good quality hider and clone correct.

This is a very slick unit with mock-adjustment for normal and suppressed modes.

This is so nice. I want to say it’s parkerised. In any case it’s gundrilled and fits the inner barrel/hop group like a glove. This is important. You don’t want your inner barrel waggling about inside a baggy outer barrel, because it affects accuracy.

Also, the trades are sublime. You can’t see them with the rail installed, but that’s not the point. This is boutique airsoft.

Again, like the inner barrel/hop group to outer barrel fit, this is perfect.

Also note the serial number, which no one but you will see.

Unless you have a blog. 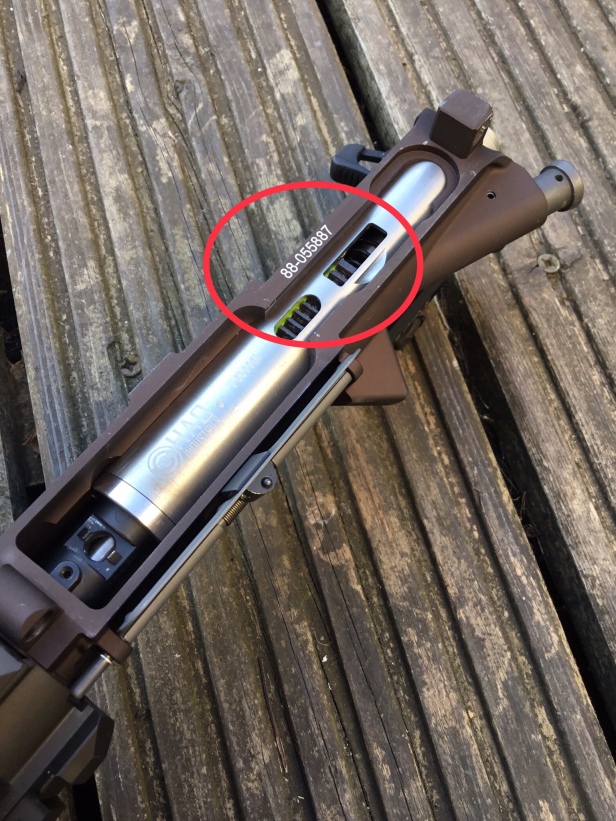 No placeholders here. HAO CNCs its own rails and they feature on spec picatinny. I’ve compared this rail to my RS A5 rail and it’s pretty much spot on. 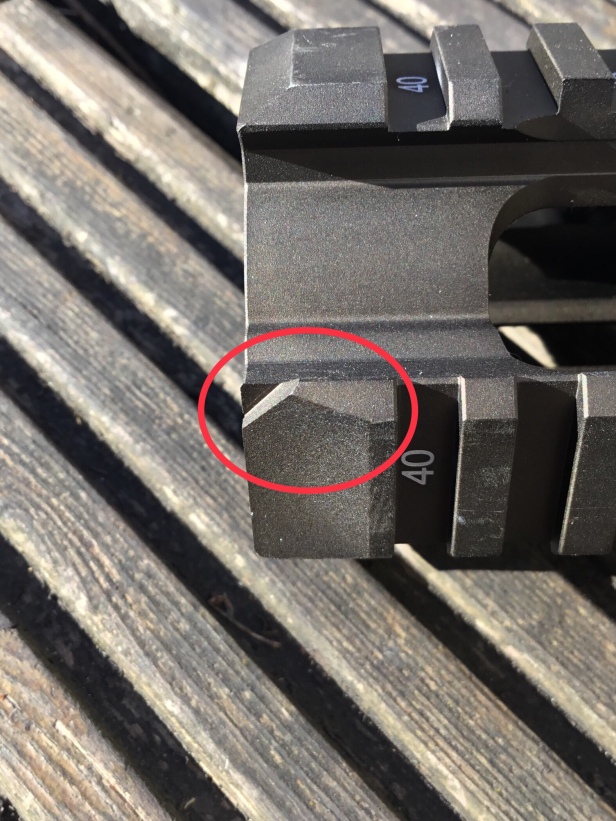 The main difference being that the RS is hard anodised; the HAO is anodised but it isn’t done to mil spec.

To be fair, the sight post is roughly cast. The RS is more refined. The HAO sight pillar does glow in the dark, though – like the RS.

The retention bolt is the correct A5 slotted type and it is held captive within the rail, so it doesn’t drop out when the rail is removed. The only detail which isn’t correct here is that the RS A5 rail exhibits a black retention bolt.

Also note the welds. They are not as neat as HK’s welds on my RS A5 rail, but who in the airsoft market bothers to weld rails? HAO, apparently.

The A5’s magwell is flared to enhance mag changes (yes, we know) and angled like an M4 so that it accepts the widest range of mag types (unlike the 416D – yeah, we know that too).

But, a lesser seen thing I noticed about HAO interpretation of the A5 is that the inside walls of the magwell are smooth. Sounds obvious, but run your fingers inside a Prime magwell. It’s like sandpaper in comparison.

Does this affect function? No. But it affects quality and that’s what we’re all about, right?

Again, it’s great to compare yesterday’s hero Prime, to the HAO. Prime receiver sets are solid and prior to SGT they were the gold standard. Ironically, SGT’s early receivers were OEM’d by Prime, but let’s not open that can of worms.

Upper to lower fit does vary depending on Prime generation and the degree of shimming at the buffer cap, but this pic serves to illustrate HAO’s preciseness.

I’ve lightened the A5 pic to get rid of shadows, hence the weird DDC-like tones. 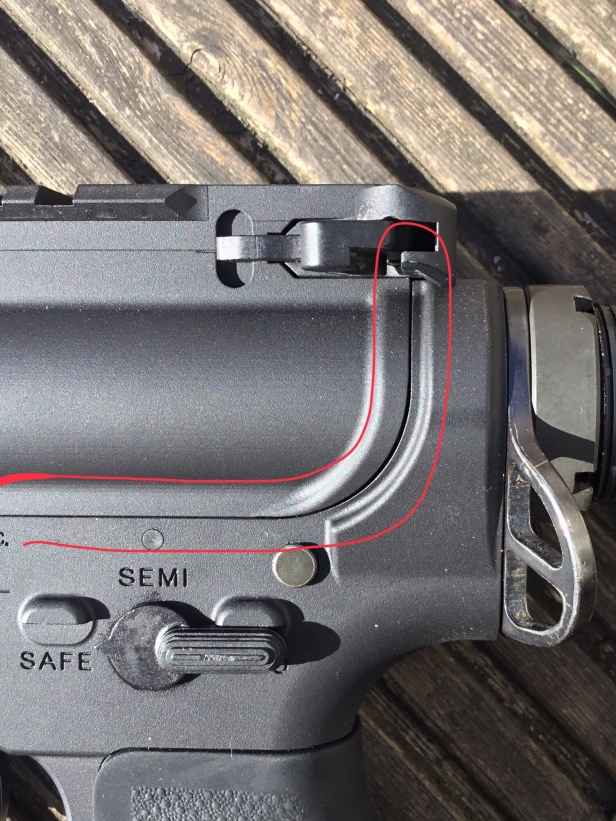 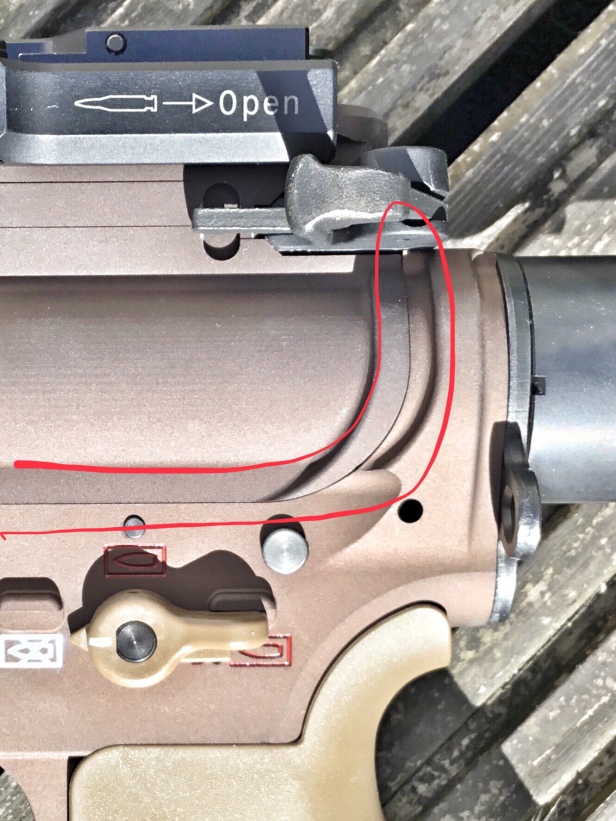 And for all you Victor fans (he was in one of yesterday’s videos) here’s the twat again: