Would anyone seriously disagree with the notion that The Slingster is in use with UKSF?

Even the most sceptical amongst us must concede that Ferro Concepts‘ rightly popular sling is likely to be somewhere in the mix. That said, even the very best educated guesses are not cold, hard reference pics.

Imploding the boundaries between reasonable argument and absolute certainty is the sling of the less analysed kit from December 2018’s Newcastle pics: 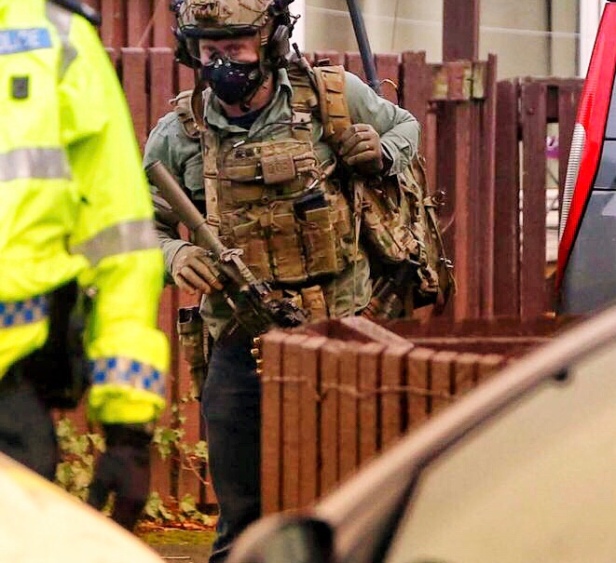 It was just an ordinary Sunday night when @bs_09_lancer pinged me:

He advanced the theory that the sling in the pic was none other than the Ferro Concepts Slingster (reviewed here). Me being me – playing devil’s advocate – I first tried to disprove the theory. E.g. “Where’s the pad?”

Well, @bs_09_lancer was well prepared for my shit and pointed it out to me (see item 3. in the pics below).

That should be enough to get anyone’s attention.

So then, together, we started to ID some salient features and came up with this:

To make sure we weren’t getting completely carried away, I sent the findings over to keen eyed @TheOtherGuy1999 for peer review. He agreed that the analysis appeared sound, based on the evidence so far.

@snrcomms gets annoyed if I keep emerging theories from him, so I sent over the info to him too. In return he sent a higher resolution crop of the guy, showing more clearly what appears to be the pad – and this really is the clincher:

I’m sufficiently convinced by the analysis – and by the crop @snrcomms sent – to give this Slingster identification greater than 90% certainty in my personal canon.

In fact, I don’t think 99% certainty is going too far.

The thing that really amuses me is that I don’t know how many times we all go back over the same reference pics, but there’s always something new to be found. This sling has been hiding from me in plain sight – for almost a year!

@bs_09_lancer deserves huge kudos for his work on this analysis. All through the identification process he was completely objective; and humble enough to concede that the sling could have turned out to be something else. A true seeker of knowledge!

In the end, though, he was bang on the money.