My HAO L119A2 IUR arrived today and I couldn’t be happier!

For now, I’ve mated it with my peripherals and Prime L119A1 lower:

It’s one of the Beta Release samples, sold to me by Tackleberry – who also sprinkled his magic all over it, and shipped it to me super fast. Thanks Tac!

Especially after he made this. He thinks he’s funny.

I, like many others, have been poring over pics of the L119A2 in use and admiring the detailing and differences between it and the L119A1.

My first impressions are how SOLID HAO’s IUR is! It’s a monolithic upper, so that’s to be expected but there’s something tangible about it when you shoulder the rifle and move with it.

My friend Jay Collins had a Prime LMT upper which was monolithic and I always loved that.

You can read about it here but check out this bit:

Will the market ever see anything like this again? Maybe HAO will step up to the plate.

I’ve only ever owned HAO ancillary items, like a Recoil Charging Handle or PTW cylinder. Their quality was top notch, but the IUR is just a joy to hold! I can’t put it down.

Being a one piece item (IUR = Integrated Upper Receiver) with RS spec picatinny I was expecting it to feel sharp. It’s not.

I have an RS UKSF KAC RAS on my A1 build and I noticed that when I swapped it over from a SOCOM KAC RAS, the UKSF one was softer and smoother to hold. Almost as if all the Picatinny edges have been sanded down and no sharp 90 degree corners exist. A close comparison confirms some bevelling has gone on, on the teeth faces. A nice feature.

Whilst HAO don’t seem to visually have so much of a bevel, their IUR also has this soft ‘touch’. It just says quality.

Furthermore, I love the way my hands feel on the IUR’s slick side rail scallops. When used with a Manta Very Low Profile rail cover, it’s even better for grip and just feels, ‘right’.

I’ve owned the original, wire routing Manta covers for some time but the Very Low Profile covers are new to me. Rich sourced mine for which I am very grateful. He has his uses 🙂

The really great thing is that thanks to some collaborative sleuthing and a recent tip off, we now know that these covers are not only issued to UKSF as part of the A2 package, but are in actual use.

Initial feelings of the IUR per se (as, like most UKSF impressionists, this is the first time I’ve picked one up) is that I would like the Surefire dual switch located back toward me a few steps.

Or perhaps I should say that I am used to it being back towards me? 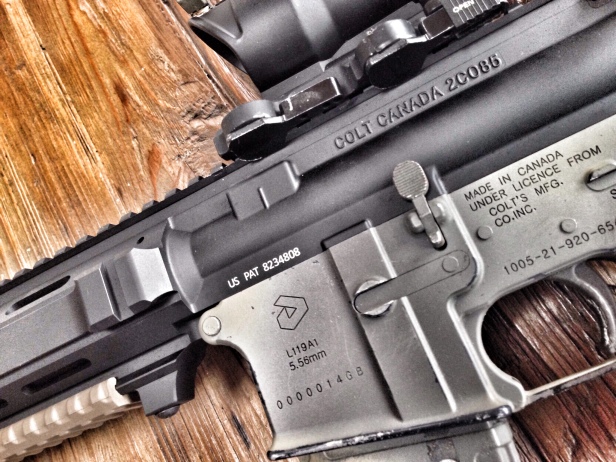 The position I had it on the A1 seemed like the perfect place, and because the side rail of the RAS was full on Picatinny, it gave options. I’ll get used to it, however.

Another feature to note is how solid the HAO IUR fits on my Prime A1 lower. Super solid! Adding even more to the fact this weapon just feels ‘right’.

Rich also has a HAO IUR, as regular readers will know. He commented that the fit of his IUR on his Prime lower is rock solid, too – more solid, in fact, than the fit of his HAO HK416A5 upper and lower.

I’ve been very patient with HAO’s IUR and played the long game. I didn’t rush out and buy an Angry Gun rail as I was more than happy with my A1. The A1 will now become my back up 🙂 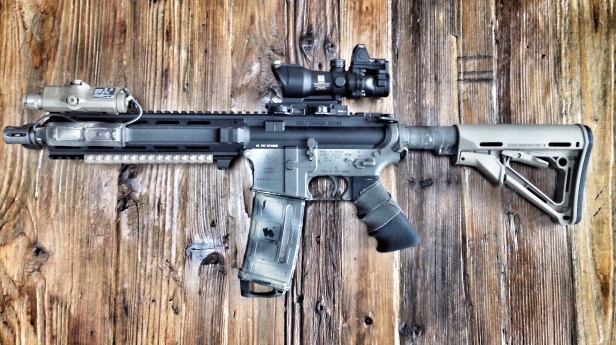 I’ve waited a long time for this to be released and I feel really lucky to buy one of the very first ever made. So thanks again to Tackleberry for selling his sample to me.

I’d also like to thank all the lads at HAO for their dedication to this project and congratulate them on not only producing a stunning replica but a fantastic piece of engineering and attention to detail.

Bismarck (HAO’s CEO) teased me a while back with a small video of him scanning a real IUR and I’ve been hooked every since.

I have already ordered PTW Value Pack 3 from Tackleberry for the purpose of building the new lower.

The Prime lower does feel right though.

So Bismarck, better hurry up before I get a blank Prime lower instead – and I issue a challenge: make the HAO upper to lower fit that solid 😉

Catch up on the full HAO IUR series here.