I decided I wanted to do an L119A1 build after reading Bloody Heroes by Damien Lewis. This book (for those who haven’t read it, I highly recommended!) is the true account of the prison break at Qala-I-Janghi in 2001. This really set me on the way with what I wanted to do.

I first converted my Cyma M4 AEG into a faithful 16” long SFW build (complete with correct trades, DIS, and PEQ-2) and had been running that for a while, before deciding I wanted to treat myself for my birthday. I invested in the fantastic TM NGRS SOCOM.

Fire Support sorted me out with my brand-new rifle. Once received it was stripped down before being sent to Keith at Airsoft Machine Shop, for the correct L119A1 trades and the barrel to be cut down and re-threaded to the correct 10” length. 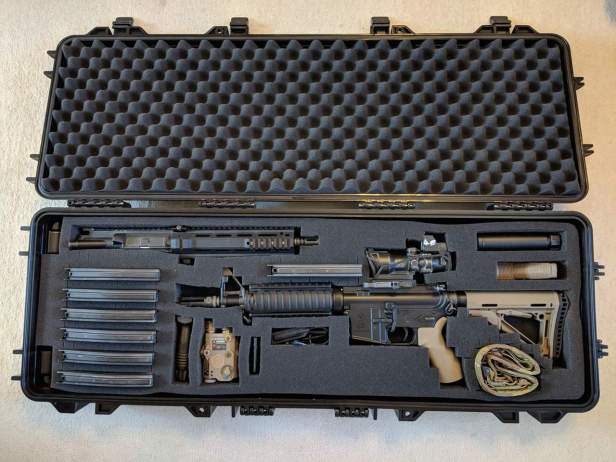 Even before this had happened I started to do research into the L119, reading this excellent build article and becoming a regular on the appropriate Facebook pages; studying as many pictures of real steel and replica builds while I waited, and waited, and kept waiting for Airsoft Machine Shop to do its stuff…

Suffice to say this was probably the hardest part of the build for me. My brand-new rifle, not even fired, was away in pieces with little to no communication. Finally, after 13 months of waiting – and watching the development of the Angry Gun A2 rails – I finally got my rifle parts back (less the work on the barrel).

Yes the trades where fantastic, but was it worth the wait? Probably not. 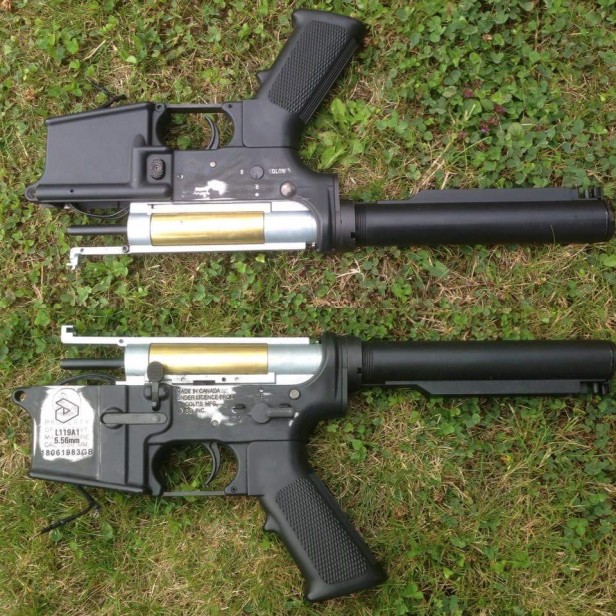 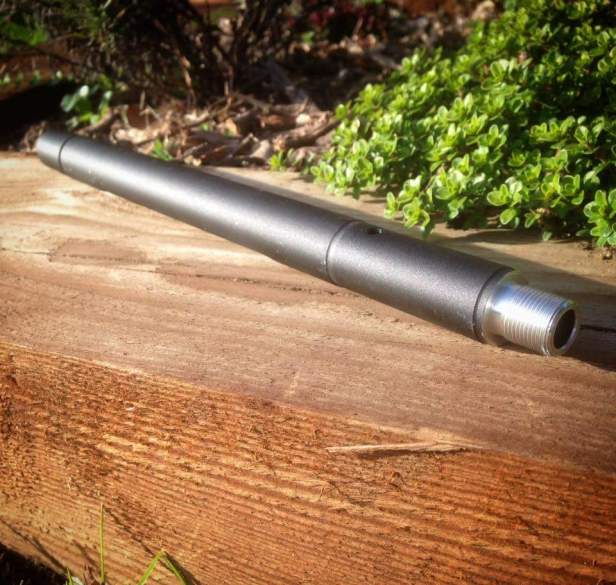 These are some of the small details that often go unnoticed and missed (along with the correct hand guard end cap), which I was lucky enough to take into consideration from my range time.

I should mention at this point that I’m serving Forces and have been very lucky to get hands on time with several RS L119A1s. This also meant that I was able to see how different ancillaries work and fit for me in a real world environment – extremely helpful and allowed me to stay true to a realistic build.

My project swiftly moved on to a level where I could use it happily at a skirmish or two; but now the airsoft A2 rails were out in full use. I jumped at the chance to buy an A2 rail with the thought of building an A2 upper in the future (which I eventually did), but I just couldn’t let go of the A1 build after all the time and effort I’d put into it. 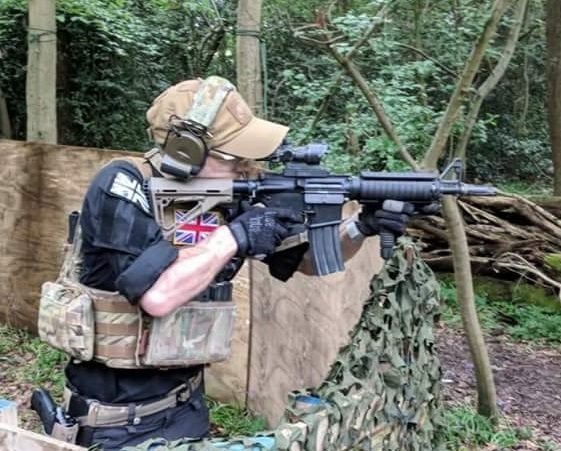 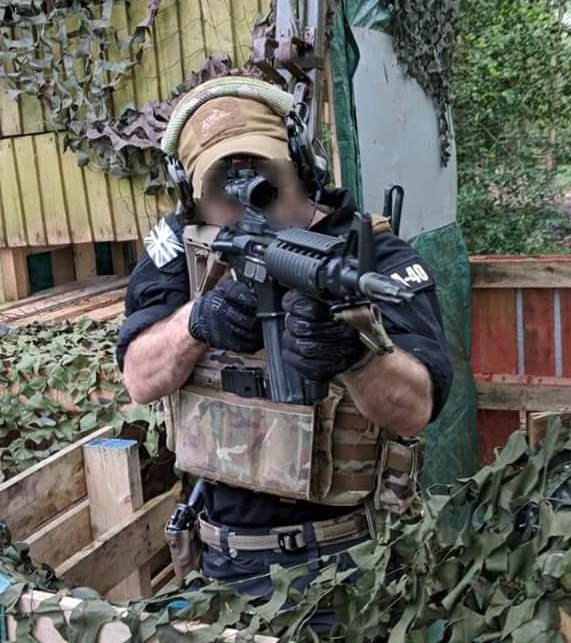 It was at this point I first started chatting to Rich from The Reptile House. A team mate of mine had his rifle featured (Tim Parfett’s fantastic HK416N). Also, Task Force Trident had produced some weighted training plates which Rich had ordered (and then reviewed), and I wanted to know what I needed to do to take my build to the next level from a TRH POV.

Real steel parts where needed – lots of real steel parts! Rich sorted me out with a KAC RAS he had spare; eBay came up trumps with a GG&G vertical grip (just before Rich wrote an article about them and scene tax kicked in!); and a Magpul CTR stock was ordered – then sent to John at J-Tac Custom for modding, so I could run a LiPo in the extended butt pad.

John had previously sorted me out with a G&P Ergo style pistol grip, as PTS Ergo grips are like unicorn poo still. A Magpul B.A.D lever was ordered along with the ASAP plate: from – and modified by – Mark Timson. With the addition of the G&P ambi mag lever, this gave me a really functional yet modern A1 build, which can be switch out for an A2 upper depending on what I need to run.

The hardest part of the build (other than the Airsoft Machine Shop debacle), was sourcing a genuine KAC RAS and the RS Magpul CTR stock in FDE. However, just as I had given up for the foreseeable future and resorted to artificially aging the standard TM RAS, Rich stepped in. While he was up front about the RAS being a US one and missing some UKSF details, it is genuine and came with all the rail covers and spare screws plus fittings for a perfect price; so I snapped it up straight away and marvelled at how secure it is now. 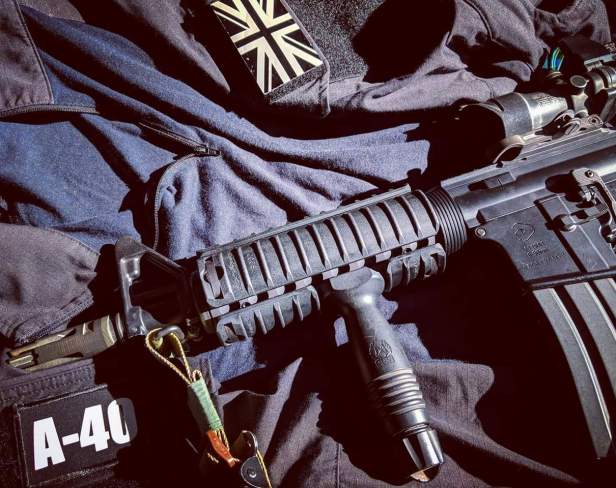 Likewise, the CTR stock came up for sale after putting out several wanted posts on Facebook sites, after I found out that my replica stock was slightly larger then the genuine butt pad that I had got for the LiPo conversion.

The next step I am thinking of is having both receivers Cerakoted, along with finishing off the A2 upper. This currently needs the correct optic, which I’m hoping will be a T1 with the correct GG&G mount; plus the correct engraving/etching for the upper.

Rich Norman of The Reptile House for showing an interest and sorting out that KAC RAS; Phil Bucknall for hooking me up with a replacement TM SOCOM while mine was with Airsoft Machine Shop; Jay from Paradigm Rifleworks for work on the barrel and upper; Ross from The Cage for the tech work; John from J-Tac Custom for parts, work and chats; Jay for advice and stickers for the LA-5; Mark Timson for advice and the Magpul ASAP; Chris Martin and especially Tim Parfett (Task Force Trident) for keeping me sane and making me see this project through, even when I was considering leaving the sport after running out of patience with Airsoft machine Shop; and finally, thanks to the few who can’t be mentioned, with their reference pics and advice on set up and usage.