The L119A1 represents a classic form factor. Simple, functional and well balanced. Each detail that differentiates a Diemaco from an M4 comes together to form a cohesive whole.

Having built a G&P L119A1 several years ago, I’d planned for some time to step up a level. So, toward the end of 2013 I sprung for a Marui NGRS.

The original concept was a basic L119A1, with interchangeable 10in and 16in uppers on a common lower. It has evolved to include more and more real parts and attachments, as I’ve become more ambitious. 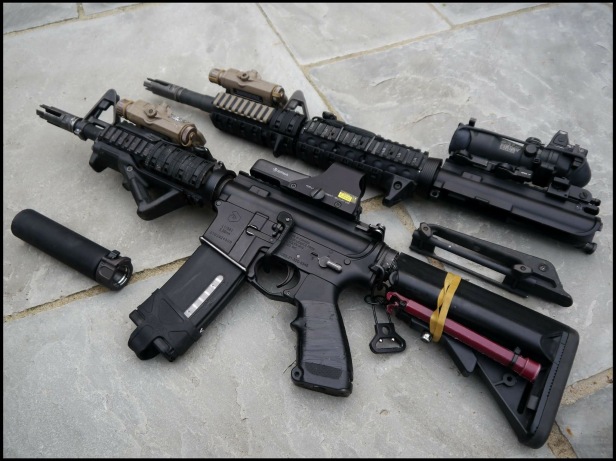 Several people have crafted stunning iterations of the L119A1 in classic form. Partly because it’s been delivered so well previously, I decided to take a different route with my own interpretation.

Recent UKSF reference pics have shown a proliferation of accessories and attachments being used. This has moved the L119A1 past the homogeneity which characterised its early use. Use of Magpul hardware, modern optics and flash hiders, etc., has updated the weapon across the board.

Underneath it all the iconic KAC RAS remains. The triangle front sight setup is there too, also representing something of an anachronism. I really like the functional challenge and aesthetic of putting together a modern setup over the classic base.

The vast majority of the attachments and parts I’ve used are pictured in reference photos; either public domain or private ones I’ve been lucky enough to get hold of. Those parts which aren’t pictured (RSA-QD/XTM Handstop/BFG Sling Loop) are from brands which are commonly used by UKSF, so it hopefully isn’t too much of a leap to suppose they’d be in the system somewhere. As with my impressions I don’t tend to copy a single picture exactly, and instead pick and choose elements from across a range of references to justify the setups which work for me.

The lower features a real Magpul ASAP and a BAD Lever, now fairly common in pics of the real thing. The lower receiver itself has been custom mill engraved and Cerakoted to ensure the all important Diemaco markings are present. 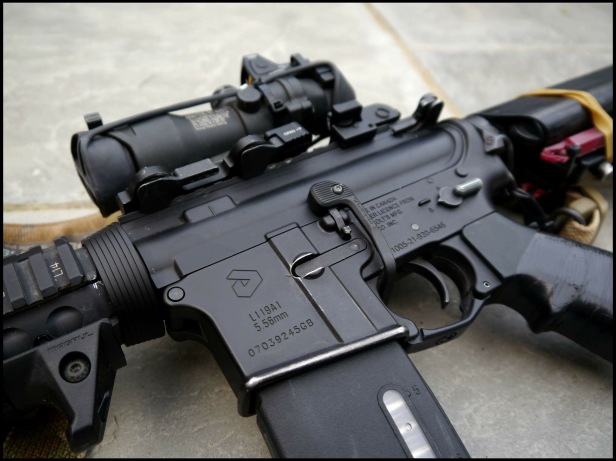 The choice of a SOPMOD stock is supported by a couple of reference photos, too. While they are comparatively rare, its a pragmatic choice – providing battery space. This might be revisited in future, to swap for a CTR with a modded buttpad for a lipo.

The Ergo Rail Extension is one of the more unique elements seen on Diemaco builds. It was chosen because I got hold of a picture showing it in use on a SFSG weapon. It instantly stood out as being both different and a perfect example of the limitations of modernising the weapon; and the solutions employed in the wild to overcome these issues. Not only does its use epitomise the approach I’ve taken in modernising the system, but it performs a practical purpose. 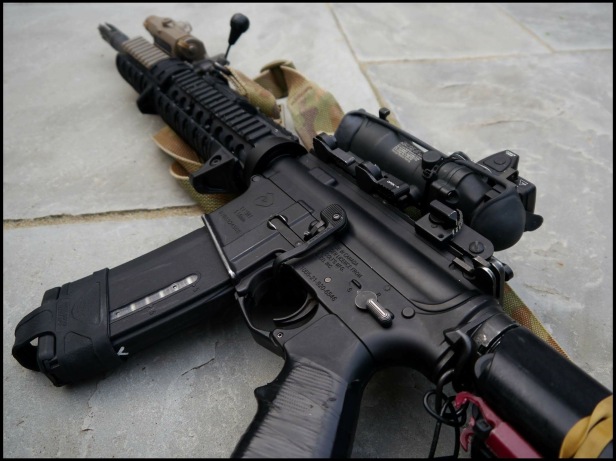 It moves my LA-5 beyond the front sight and allows a grip position much further forward than usual. It also allows my RSA-QD sling mount to be pushed further forward, facilitating use of a 2 point sling. This is vitally important when needing two hands to climb or negotiate foliage. Mobility is one of the key strengths of my play. I’m not an incredible shot, so a lot of my kit decisions are about helping me get into good positions. The 16in upper also forgoes a flashlight, since I rarely need one in woodland. Plus, any excess is an extra snag hazard. It does, however, have as close a replica as I can put together of the ACOG TA01ECOS, which has been seen in recent UKSF photos.

The CQB upper has the fairly standard choice of AFG1, LA-5, Scoutlight and EOTech. The latter being driven primarily on the basis of the NGRS recoil causing reliability issues in cheap clone sights. EOTech is the most economical real deal sight brand, which works for the build. The only major departures from a standard setup is the adaptation of the Angry Gun suppressor to work with a modded L119A1 correct flash hider; and the modding of a Haley Strategic Thorntail with longer bolts and spacers to hold the Scout light higher, adjacent my LA-5. This gives a more compact package and moves the mount away from my hand.

It’s been a long build and I’ve proclaimed it finished a couple of times along the way, only to revisit it as my ambitions for it grew and I found elements that didn’t quite work as I anticipated.

I think it’s pretty much there now though and I have the L119A2 to plan/dream on. Not forgetting an often neglected LWRC project…

A huge thanks to Jay for this magnum opus! A pleasure to publish 🙂