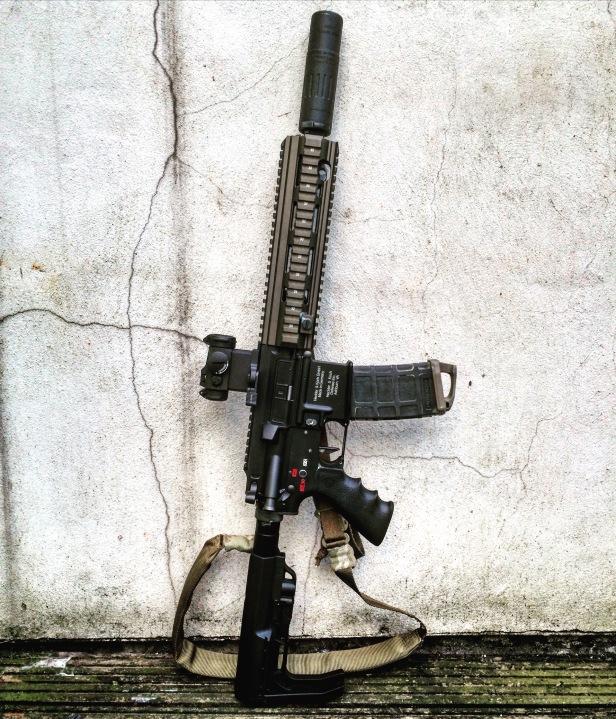 It doesn’t take a project manager (my day job) to tell you that nothing ever goes exactly as planned.

In fact, the best plans are often flexible enough to deliver the right outcomes, regardless of unforeseen circumstances along the way.

Last month I conceived a ruleset, to use in the aesthetic reboot of my SGT 416D:

There’s nothing new about rule-driven builds. All mil builds are rule-driven, if you think about it; and so are some civilian builds (the better ones, usually).

Typically, it didn’t take me long to break some of my rules. But in doing so I’m starting to satisfy my main outcome with this work in progress (WIP), which is to transform my 416 into something which doesn’t resemble a massive pile of shit.

High speed, low drag form factor – the slicker, the better, and to include pre-existing SMR

I’ve dropped the RS SMR for now, in favour of an RS Heckler and Koch RIS. 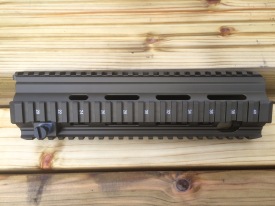 When I wrote my ruleset, I hadn’t fully appreciated how pervasive tube rails had become. Being a bit of a contrarian and having not used a RIS on a blaster for some years, I decided the SMR should be left out.

This also means I don’t need to stick to rule 3.;

Assume use of separate HAO 416 Quad Rail for bolting shit onto for CQB; so a light and other peripherals are out of scope for the SMR iteration of the blaster

…because I won’t now need to use my HAO 416 RIS – sublime though it is – unless I want to change the look.

But, I really think this build needs some BUIS. The top rail just looks bare. So BUIS are totally in the mix…although they are proving to be a ball ache to choose!

The easiest part to choose was the rule-breaking RIS. It’s a bit different to the standard HK416 RIS.

So that’s one mess I no longer have to look at. 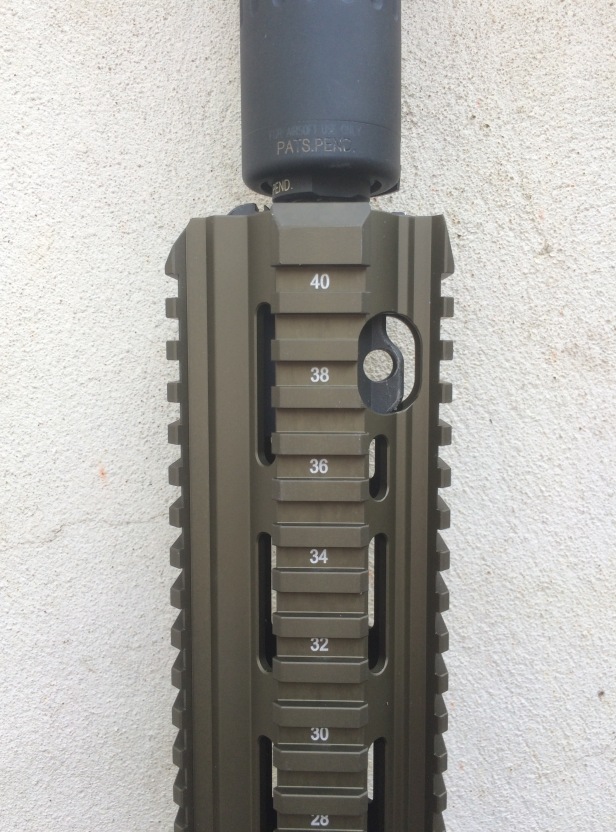 I think the length also really suits the PTS AAC Mini4 suppressor, which I wanted to retain. 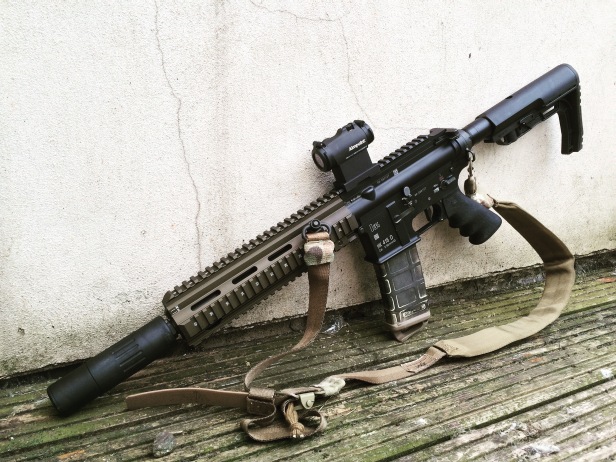 The alternate PTS AAC M4-2000 suppressor (which I bought a few years back for the 416 in classic mode) adds just a touch too much length to the blaster and doesn’t really suit the 9.5 rail.

Secondly, the RIS is in RAL8000; which is a green-brown. RAL is a colour standard, a bit like Pantone.

The exact tone – how green or brown the RIS looks – is often dependent on the environment. Looking kind of olive, here:

Lastly, the RIS exhibits an HK416A5-style retention cross bolt – which has a slotted head. So it’s neither the allen head of the MR556a1, nor the cross-head of the HK416D. 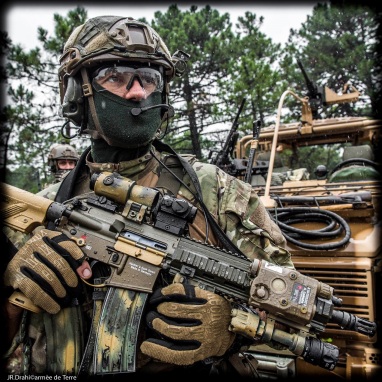 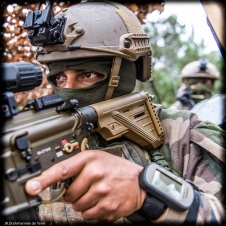 I’ve no idea what the odd ‘spooge’ mess around the bolt is, but I’ve since tidied it up. I’m guessing it’s some kind of lubricant/anti-seize which Heckler and Koch applies at the factory: 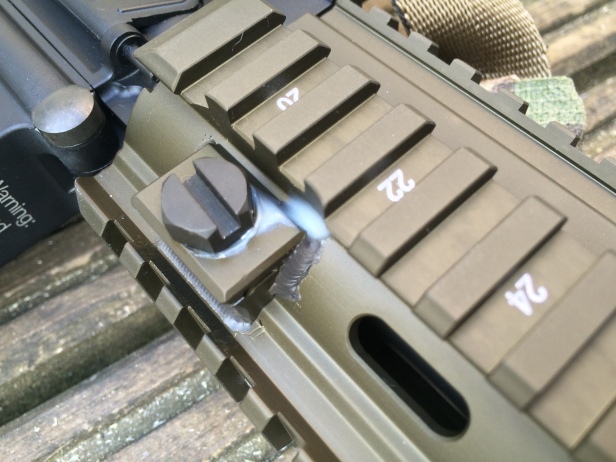 Check out the weld in the pic above. Much neater than HAO’s version – although in fairness to HAO, they have been bothered to use 6061T6 for their rail (which can be welded) and do a similar join:

It was really the length and colour of the RAL8000 RIS which appealed. I wanted it as soon as I saw it and it has unlocked a whole new colour palette which I’m not yet sure how to exploit.

For a while I did have the perverse notion of building the blaster with as many OEM Heckler and Koch parts as possible. I still have a slimline a5 stock on order, in fact – so we’ll see how that looks when it arrives; although I do like the current MFT Battlelink Stock. 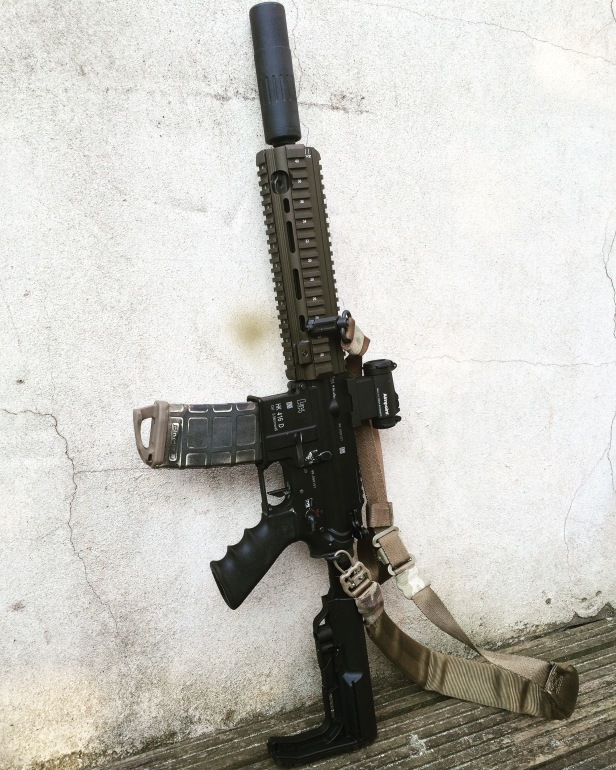 I do have some small Heckler and Koch OEM parts to be added when my 416 is next with Tac. No rush on that, as I’m enjoying things as they are. 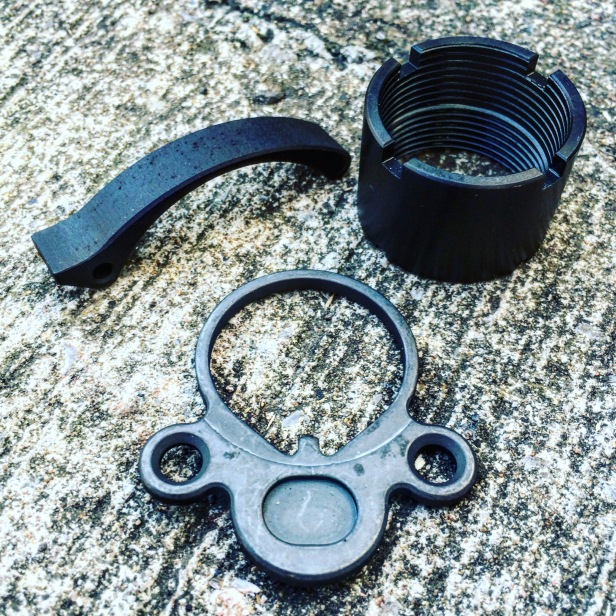 I was in two minds about keeping the race trigger on this build, but the flat bladed Geissele type can be evidenced in the wild:

…so it will be staying until it starts irritating me again. I can’t see the flat blade suiting the curved a5 trigger guard I’ve bought, so that may be a factor.

Thnking back, I’m not altogether sure why I limited myself with rule 7,:

Minimise use of Magpul products for no other reason than as a point of interest, except where utility would be negatively affected

Magpul is, after all, probably the most popular aftermarket brand used in the wild. Because the new RIS doesn’t have integrated QD sling sockets, I’m using a Magpul RSA QD. I’ve since mounted it on the top rail to keep it out of the way of my support hand.

As with all WIP projects, things will be iterative. But I’m pleased with the direction the build has taken. 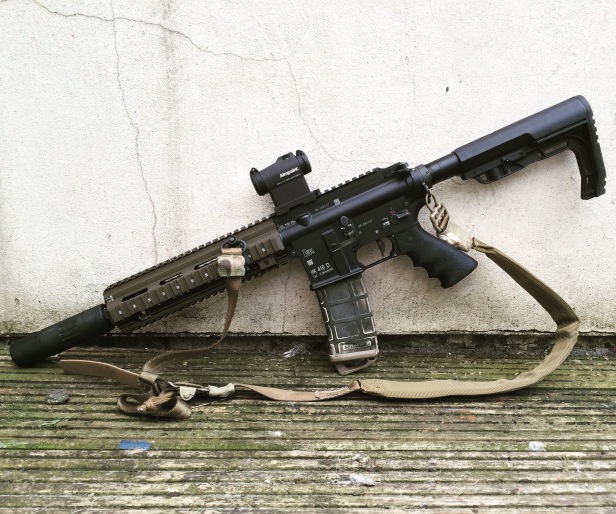