It’s been eight months since the last update I made to my Tackleberried HAO HK416A5 PTW.

To be perfectly honest I’d gotten a bit bored with it. However, I was doing some back to back testing versus a TM Recoil on the weekend and it piqued my interest again.

I started by adding the Sig Sauer Romeo 4T optic (which is awesome, BTW) that I bought for my forthcoming L119A2 PTW build. I then added a Magpul RSA, to use with my Magpul MS3 sling. After that, I added a Magpul AFG2.

Then I remembered that I had a genuine RS H&K HKey Slimline Handguard spare, so I thought I’d swap out the HAO quad rail which came with the A5 kit.

Needless to say, the RS item is lighter and slimmer than the quad rail, and it was TM’s Geissele SMR clone – attached to the CAG 416 NGRS I was testing – that reminded me how much I like slick military front ends. 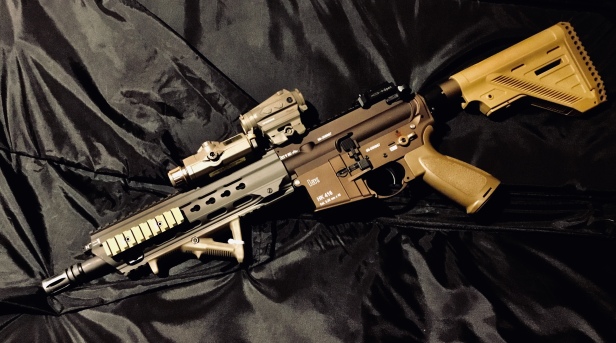 The Slimline Handguard is – believe it or not – in H&K’s low observable RAL8000 colour. Of course, regular readers of the blog will know that RAL8000 spans a massive range of colours and tones in this context.

Amazingly given the stark contrasts, the whole build does rather gel and the rail is a real point of interest. I’m glad, as the Slimline Handguard is a lot nicer to use than the quad rail.

And no – there’s no front BUIS. I just didn’t remove the rear BUIS to match.