A couple of aluminium barrels arrived today, from HAO. In this blog I’m going to focus on the M4A1 SOCOM outer, which is really impressive. It’s the 14.5″ counterpart to HAO’s ‘MK18’ outer (for a Block II CQBR).

HAO’s aluminium outer barrels are composed of 6061T6 with 14mm CCW threading. They are nicely lathed and it’s clear that attention is paid to how they are finished.

Up until fairly recently most people would choose Dytac’s aluminium outer barrels for PTW, in order to shed some weight. This changed with HAO’s entry onto the market.

As usual for HAO, shipping was really fast and the barrels were well packaged. Proper tough outer packaging, bubble wrap, cardboard tubes, cling film, end caps…this is not a company that risks your items turning up in anything but 100% perfect condition. 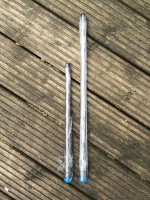 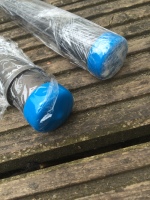 Because HAO’s 14.5″ outer is aluminium it can’t be Parkerised like the RS or the OEM Systema barrels, which are steel. Instead it’s anodised in a rather fetching approximation.

Below: check out the trades on the HAO, left. Dytac’s aluminium outer also has decent trades, in fairness, but the Systema (right) doesn’t have trades:

Aesthetics aside, how’s the hop fit? It’s really important that the hop is held level, for obvious reasons. If the hop slops about or isn’t level, feeding will be an issue.

Well, you don’t get the super-snug Systema fit – with satisfying pop when the hop is removed from the outer – but HAO’s hop fit appears to be on spec and there’s very little movement when the hop is in place (less than that of the well used OEM Systema outer I selected for comparison, in fact).

Not only that, but there’s a proper steel knock pin. Oh yes!

In the past, many aluminium PTW outer barrels have suffered in the knock pin area. Dytac outers, for instance, needed attention because they came equipped with only an undersized grub screw.

That’s fine for hand-tight barrel nuts, but if you really want to torque the barrel nut to RS standard, then the knock pin needs to be big enough to fill the corresponding void at the head of the upper receiver’s barrel nut thread. In that way, the outer barrel won’t rotate off the 12 O’clock spot as the barrel nut is tightened.

So full marks to HAO for installing a decent knock pin on what, on the whole, seems to be the best 14.5″ mil PTW aluminium outer barrel to date.

Looking forward to getting this installed.