For me, building is the fun part of cloning rifles and as most of my close friends know I don’t hold onto guns long.

Once a build is complete I honestly get bored. So I sold my 416 once it was as close to correct as I was willing to make it. It went to a close friend and a good home. He will very much enjoy it and maybe even pass it on to his kids one day, since he doesn’t sell guns ever.

The first clone I ever did was one I’d guess a lot of people have done – a standard M4A1. I was 16 and my Dad gave me my first lower. Normally you have to be 18 to buy a rifle in the US – or 21 to buy a stripped lower. But you can have one passed down from a parent at 16. Ironically it’s the very same lower I used for this build and did my first Form 1 (SBR) on.

After that first M4A1 I wanted to do a SOPMOD Block II, which I have done since, but I wanted something more original.

Then I saw the helmet cam footage from Level Zero Heroes and the Block II Recce. Of course I didn’t have the cash at the time to afford an NF 2.5-10×24 and couldn’t get a can until I turned 21, so the project quickly died and I did other clones. Then I saw the SEAL Team 8 photo of the more recent Block II Recce, and so with renewed interest I set out to do a mash-up of these two iconic rifles.

Aside from the form factor, the build was meaningful to me because I had attempted it before and failed. Of course my age wasn’t something I could do anything about, but still. It was always one of my favorite guns seen “in the wild” and it’s just a very eye-catching setup. It gets more attention at the range than the 416 ever did!

I honestly had the build done inside a week. I had Colt receivers and BCGs laying around as it was, and KAC irons. I cut down a Douglas 16″ 1 in 8 mid gas stainless barrel I had, and grabbed a DD rail. I still had my Surefire can – obviously – and had a spare 4 prong flash hider.

I bought all the LaRue stuff I needed and got the H1 off a friend of a friend who was selling it dirt cheap. That’s also why I got an H1 instead of a T1. I won’t be submerging it or using it with NODs, as I mainly just use my laser; so the T1’s additional functionality isn’t necessary anyway. I grabbed an M300U and an Impact Weapon Components (IWC) Thorntail SBR2 Surefire mount and that was it. It was a pretty quick build all in all.

The only part that gave me problems was the IWC Thorntail, because I guess they’re swamped with orders; so it took some time to get to me. Those dudes treated me awesome though and refunded my shipping, since I paid for two day and it took a week.

Other than that the only issue I had was with the bipod. I originally purchased the Harris BRM-S with the integrated LaRue mount (I’m not a fan of Atlas bipods on anything shorter than 16″). However it brought the bipod too close to the laser. The MARSOC dude addressed the problem by having half his laser hanging off the side of his rail but that isn’t great practise, because it’s easy to break off the illuminator.

For dudes with a supply chain and tons of replacements it doesn’t matter, but I don’t have that luxury. So I sent it back to LaRue and got a standard BRM-S with their mount – just not integrated.

The balance I’ve struck between the two influential rifles isn’t perfect. Really the build is way closer to the MARSOC one.

I’m not using an Atlas bipod or NF rings like the SEAL but I am using a Surefire can. I added the suppressor cover to combat the mirage from the can when it’s hot, and the Bowers cover I’m using has been seen in use with SEALs. The light wasn’t present on either build, but every good combat carbine needs a good light. What’s more, the IWC mount places the light in the perfect position to activate with my thumb; and it’s right next to the tape switch for my laser. A really good example of economy of movement.

At this point there isn’t anything I’d do differently or change. The thought of changing rails to a KAC URX 4 has crossed my mind, but I’m not a fan of mounting lasers to rail sections that aren’t part of the rail itself.

For once I think I’m going to keep this build around. It balances well, feels great on the range, shoots like a wet dream. I’m pretty damn pleased. 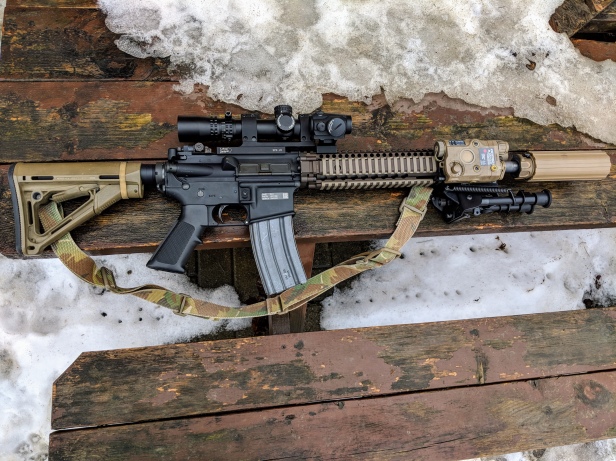 What’s next? Well I’m currently trying to get a complete kit together, something Vanilla SEAL inspired but with my own touch as usual. I’m going to keep The Reptile House updated on that and with any luck we’ll get it in to the blog some time soon.

As far as clones go, though, I’m thinking about doing something in a bigger caliber than 5.56, maybe a 6.5 gas gun, who knows?