Mixed news from Crye about their prices from 15 March 2018, but many sources are focusing on the negative. There is actually some good news buried in the advice they’ve issued.

A number of very popular items – like the CPC, JPC and JPC 2.0 are falling in price; and “significantly” so.

This is great news for anyone wanting to buy one of the very best plate carriers out there – and which I reviewed here.

This also confirms that the original JPC itself is not being discontinued – as I reported here.

And these aren’t the only items with significant price reductions. I’ve pasted Crye’s message below, which includes a list of those products.

Now, the extent to which these reductions are passed on to consumers outside the US is a moot point. I rarely buy Crye gear from UK retailers because in my opinion it is overpriced at source by the UK distributor. That means UK retailers have absolutely no chance of asking decent prices of the consumer, unless they resort to grey imports or market Crye gear as a loss leader (which the UK’s biggest and best known tactical gear shop did until very recently).

The UK isn’t the only country affected by extravagant Crye retail prices. Just look at the prices at TacWrk in Germany. Highly exotic, to say the least. Other European sources such as Armamat aren’t as expensive, but are still steep when compared with importing from the US. Granted, there are other costs involved when importing which aren’t financial; the inevitable wait for customs clearance, when using the likes of Royal Mail or Parcel Force, being one of them.

Getting back to Crye’s statement, the talk of automation is interesting and I wonder if that will mean increased capacity? Given that Crye often cannot satisfy demand, it is curious that they’ve recently developed a social media strategy after years of absence from most platforms. Increased capacity to satisfy demand would, of course, be a huge positive.

Will the significantly cheaper CPC, JPC, JPC 2.0 and other items be as well made as their more expensive forebears? Who knows. 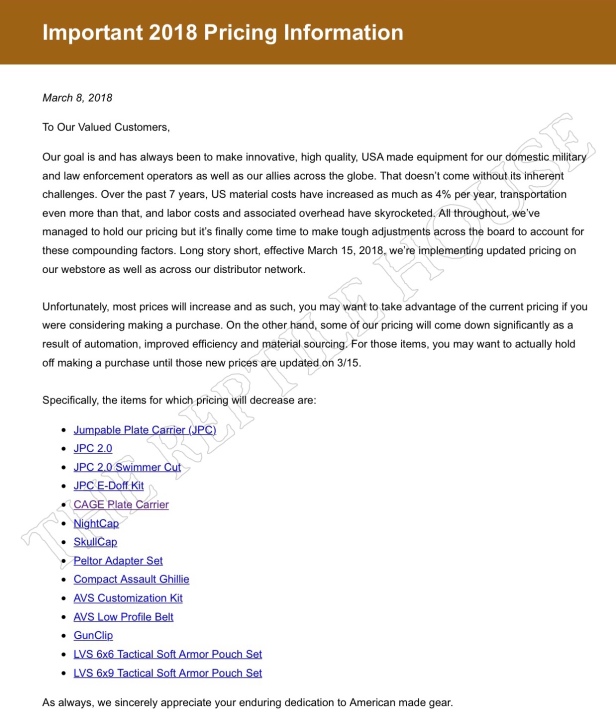 Want to read some Crye reviews? You can find a whole list of them here. The list is updated as more reviews are published.