I’ve always had a soft spot for SOPMOD builds, especially the Block 2 with its Daniel Defense rail in the well recognised FDE. After using my own 12.5” DD FSP rail, it swiftly became my favourite configuration.

Until, that is, I saw an airsofter/live shooter share his interpretation of “Block 3”. Fuelled, no doubt, by in the wild pics like this one:

My mind was made up. I needed a CQBR length Geissele Mk 8 rail.

While Block 3 or Mod 2 are not officially adopted designations/configurations, these terms are useful unofficial shorthand (in much the same way Block 1.5 is used). But, since SOCOM has chosen to use Geissele Mlok rails on their new sniper systems, perhaps we will see the Block 3 upgrade become more widely used?

I hadn’t seen a Mk 8 rail here in the UK yet (least not for airsoft), which sounded brilliant at first. However, the realisation of having to track one down was intimidating. Everywhere I looked showed the rail out of stock.

So, after the best part of the year of searching, I contacted a well known Systema PTW specialist. To my delight, he said he could source the Mk 8. I placed my order and played the waiting game. A couple of months or so went by, in constant contact, and the rail was in my hands.

It’s stunning, and came with all the tools required for fitting from Geissele themselves.

I planned on installing the rail on my GHK M4. I’m an avid GBBR fan and the GHK is hugely reliable. And, with the exception of the upper receiver’s barrel nut thread (explained below), it accepts most if not all real steel parts and accessories.

My parts list details what I’ve used internally and externally, and I’ve optimised for CQB sites. I’ve played it safe by introducing parts that should be slightly less punishing in terms of FPS and energy output, but still carry some degree of accuracy. 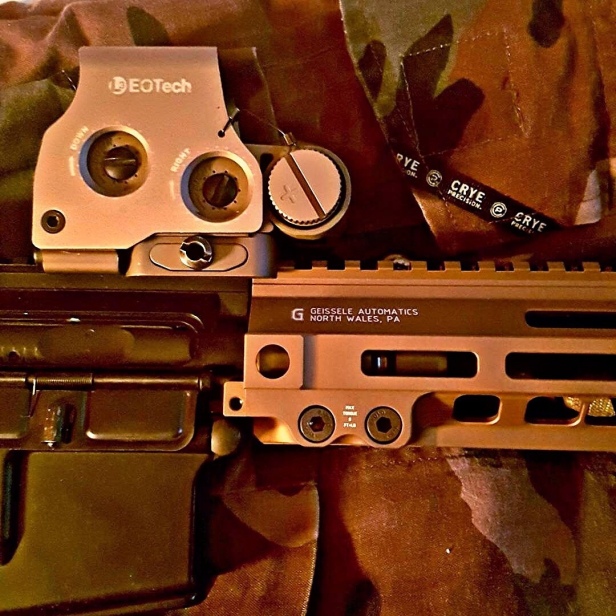 Installing the rail was a relatively easy process. However if the upper you’re planning to use is not totally milspec (like my GHK) you’re in for some modification. This had already been done in order to fit my former DD FSP rail, so my own install was truly “drop in”.

The modification is an easy enough process: the barrel nut thread simply needs to be recut. From personal experience, I recommend using a genuine thread die that is 1.25 x 18 tpi. Madbull has one, and it didn’t quite cut the threads correctly for me. However, other GHK users have used this fine – so use at your own discretion.

Once the rethreading was done, I had to cut my mock gas tube by a few millimetres. The pin holes did not line up with the Geissele gas block. After doing so, everything dropped in nicely.

I’m continuously thinking about how I want to improve the Block 3. As I write, I’m already searching for a fixed front sight and a new ambidextrous charging handle; but I guess you’re never really done building…