I’ve had the CTSFO Sig MCX now for a little over a year and I have shot the MCX on the flat range, in shoot houses, day and night, from vehicles, in tube targets and really tried to give the gun a thorough workout.

This is not intended to be a technical review, simply a users viewpoint, and a guide for people wishing to clone the CTFSO rifle.

First, these are my thoughts, as a law-enforcement shooting instructor, on the pros and cons of this platform. This will contain both opinion and fact, surrounded by educated guesses, so this is intended to be my feedback, not an absolute.

My involvement with the Sig MCX came at the early stages of the rifle, as I work with Sig Sauer frequently, and I was in the right place at the right time when the UK were looking to adopt a new platform after being with LMT for many years.

The LMTs are nice guns and perform admirably, I own and enjoy using many of the LMT weapons, but the MCX was at that time a new and interesting concept, so I immediately knew I needed to be involved.

I contacted Sig USA and they very kindly sent me two UK CTSFO guns that were, at that time on trial with the Brits, for input and suggestions for development, and these are what I have been using for my testing.

To call the guns I have been using ‘clones’ is somewhat of a misnomer as they are as issued and were pulled from the Sig contract. Where I have been keeping pace and cloning is with the configuration of the MCX as CTSFO uses it today.

The Sig MCX is a nice platform. It shares pretty much the same manual of arms with an AR-15 so anyone familiar with the AR will be able to transition with minimal fuss over to the MCX. The main differences are in immediate action/malfunction drills because working parts are not the same.

The MCX includes a lot of upgrades, most of which address wear items; I would expect to see a reduction in maintenance costs over time.

The primary upgrades are:

Steel insert on the cam path
This is a piston operated gun, so the cam pin would usually create wear over time on the upper receiver due to early and fast unlocking. This is cleverly designed so that the upper will survive whilst the wear area can be replaced.

Ambi Safety
This is interesting as the internal core is compatible with full auto even on the semi guns, so there must be some supply chain savings for Sig there. The right hand side lever, as usual, will rub on everyone’s trigger finger.

MCX specific BCG and dual recoil rod
Although Sig never officially called it as such, there are several generations of MCX which were the results of mid-life upgrades and safety recalls. The UK guns were so early in the development cycle of the MCX, they were all issued with the Robar NP3 coated carriers. These are silver and stand out from a distance when looking at the UK MCX’s compared to all others you will see.

I have a later version of this in my guns which resolves some issues over 300Blk operation and that is nitride coated and has a shiny black appearance. Again the early guns differed when it comes to the bolt, and the original bolt looked basically like any other AR15 bolt with no gas rings. The later versions have stress-relieved lugs and chamfered edges allowing greater reliability in dirty operating conditions – something which really helps when using a suppressor.

Charging handle latch inserts
Steel roll pins are installed to stop wear of the charging handle on the upper receiver. Yet another mid-life upgrade was issued with the charging handles. The later ones have a portion on top which helps redirect gas blowback and they relocated the roll pins, creating a stronger pivot point and preventing pins from snapping.

Replaceable Forward Assist
This whole unit is replaceable, I’m not entirely sure why. I’ve never seen a worn out one.

The UK Police were, as far as I know, the first Law Enforcement agency to move over to the MCX platform for their rifles. As of this moment they seem to be limited to only the more specialized units, specifically the CT (Counter Terrorism) Unit.

The specific setup of the rifles is certainly unique. It would be interesting to find out how/why certain decisions were made.

Here’s a picture of a UK Met CTSFO with the MCX Rifle:

One of my actual guns is pictured below. It was built by Sig specifically for the UK Police contract, and at this time there is no US availability. It is however listed in the US LEO catalog, so I suspect it will be available in due course. 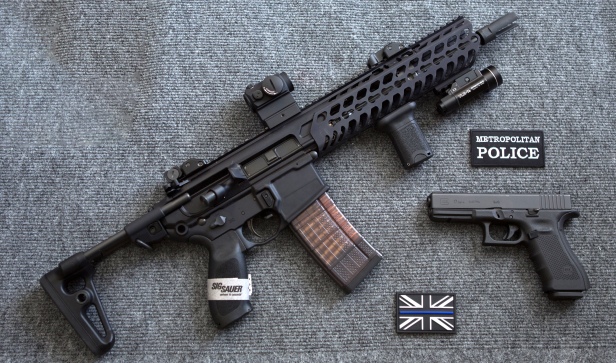 Upon initial viewings of the gun, and then when using it exactly as configured, several things about the UK police gun stand out as less than ideal.

The biggest single ‘issue’ I have with the current configuration is the Phase 5 bolt release lever. This replaces the standard bolt catch and puts the lever inside the trigger guard. I don’t like things in trigger guards that are not triggers. Your finger should be used for one thing, which is pulling that trigger.

Just as the US police have seen many negligent discharges pulling Glock triggers when unloading or breaking down for maintenance, the UK teams should not be using their trigger fingers for anything except making bad people stop.

Another issue for actual deployment is the single point sling. If you need to help a colleague out, or drag a hostage, what is happening with your gun? Single point slings should have been left behind with the MP5.

The placement of the front sight is odd; they have placed the sight on the last part of the fixed fore-end. This covers the gas selection port (suppressed vs unsuppressed setting) making it harder to change, but more importantly, it seems like this was done because they didn’t trust the removable handguard. The fore-end aligns using a keyed joint, which I have personally removed and replaced multiple times – checking zero at various distances and finding a complete return to zero.

None of the use/config issues above are actually problems with the Sig MCX platform itself.

On to the actual gun itself. The only major change I needed to make in comparison to the AR15 is the position of the light. On a standard AR-15 it is very easy to locate the light on the side of the fore-end and the switch on the top or side 1913 rail.

The gun has an 11.5” barrel. With the self-adjusting gas system, it runs fine with 5.56mm ammo. In fact, it has now done just over 9000rds with low powered imported 55gr ammunition and in all of the rounds I have run through the gun, I have not had one single malfunction. Reliability seems excellent: on par with a quality AR15 thus far.

The trigger is heavy. My gauge measures it as 8.5lbs. However, it is breaking-in/getting smoother with use. I dislike heavy triggers. I can watch officers, when dry firing, pull the gun significantly as they struggle to overcome the pull weight. 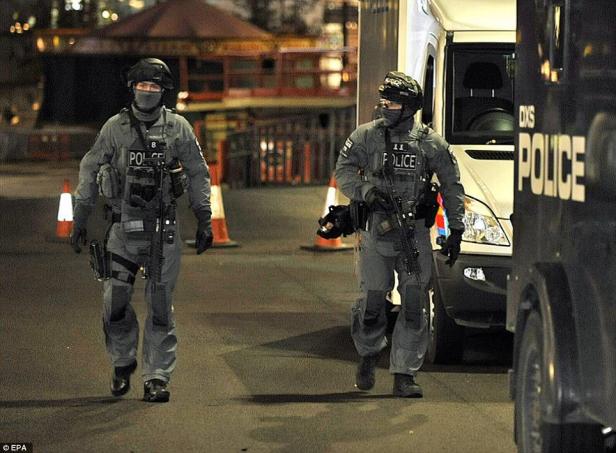 The UK gun has a telescoping stock, the one that is slightly shorter for use with the MCX (I think it works on the MPX too). This is certainly better than the OEM ‘Kate Moss’ folding stock as seen on most current MCXs, as it allows for adjusting the length of pull.

Thus, users with body armor – or smaller people – can adjust it to their liking. The disadvantage is that it is shorter fully extended than a normal 6 position M4 stock, so taller people may have issues. It is very comfortable to use, unlike an MP5 collapsible.

The recoil – I am guessing due to the dual spring design – is very slight. 5.56mm recoil is comparable to a mid-length direct impingement system. It is certainly softer than a carbine gas system. Overall it allows for very quick follow up shots and it is nice to shoot.

With the Kate Moss stock, the gun is front heavy, noticeably so. With the telescoping stock it is still front heavy but it is better balanced and easier to get used to.

The extra weight slows down movement of the gun a little, but it is still very manageable.

As of 2017 the gun has had some changes, which clearly show some evolution of training and intended use.

The triggers have been swapped out for the Sig Match triggers, which the rumor is, are made by Bill Geissele. This is likely true as they are an almost exact look, finish and pull compared to the Geissele SSA. I think this is one of the fundamentally largest changes and a great advantage to the users.

Differing from a military contract, the guns are not capable of automatic fire, so the semi auto trigger gives a good two stage pull and its break is likened to snapping a carrot. A far cry from the original mil-spec trigger.

The guns retain Streamlight as the light of choice, although it appears that the TLR-1 standard lights have mostly been swapped out for the laser equipped TLR-2 High Lumen variation with green laser.

Some guns are now heavily based on the CAG MCX and have been configured with a suppressor-ready rail. They also feature the Sig SRD-556 suppressor.

They have also adopted the same folding adjustable stock, which allows the gun to be very quickly deployed and adjusted for many different body sizes.

Something interesting from the perspective of the CTSFO and the newer guns being brought onboard is not the incorrect placement of the iron sights, but the complete lack thereof.

Knowing that UKSF place a liaison with CTSFO and work heavily alongside them, I wonder if the lack of iron sights is a carry over from the SAS operators tasked with helping the police devise tactics and equipment.

UKSF’s primary operating takes place at night, with NVGs and their primary aiming tool is the IR pointer on their LA-5 unit. The optics at that point are backup.

My personal position is that this is a mistake for Police work. Iron sights work in heavy rain, when going from cold to hot, or dry to humid (such as getting out of an air conditioned car into the cold outdoors), all of which are situations that even the best optical sights do not work well in.

From my perspective, iron sights take up so little space, always work regardless of battery or weather and allow surgical shooting at all law enforcement distances, so they really should be issued on all guns.

Sig continues to innovate and improve the platform. Recently there was a major change whereby the standard MCX entered end of life, replaced by what is being termed the MCX Virtus.

It will be incredibly interesting to see how the MCX changes and if other units adopt it given the frequent mid life upgrades. Overall I think the MCX is a good platform and should serve UK Police well and for many years to come.

This article was originally published in 2016 and represents a snapshot in time. Big thanks to HRW for tweaking the article prior to publication here, along with providing new pics.