As they promised, Tactical Kit got a pair of Patrol Incident Gear’s (PIG) Full Dexterity Tactical Delta Gloves to me today – the day after their worldwide debut. Thanks very much guys!

I’m always suspicious of budget versions of stuff and these gloves are described as a low cost option by PIG.

To me, budget means compromise. However, these gloves prove again that my preconceptions about value are often wrong. On first impressions I think I actually prefer the Delta to my PIG FDT Alpha Gloves; a style I’ve been buying since they were released by SKD Tactical some years ago.

In days gone by, you were sometimes greeted with this kind of message on SKD’s website:

That was circa 2013. Supply of PIG’s Alpha gloves just could not keep up with demand, such were the gloves’ popularity. I bought my first set from SKD’s very first batch in 2012. There was a long wait between that release – which in hindsight was more of a test version – to the full production release.

After I’d trashed my ‘test’ gloves, I wrote to SKD with my thoughts and they promised me a new pair of gloves from the next production run – which would incorporate the feedback they were getting from early adopters like me. They didn’t have to send me a free pair, but they did.

True to their word, the production gloves looked the same and had all the same features as the test version, but were tougher. This surprised me, because SKD/PIG had always said the Alpha glove was designed with durability as the opportunity cost of full dexterity.

The Alpha (and the new Delta gloves) should always be viewed as a ‘consumeable’. PIG says these gloves are not meant to survive the apocalypse. With this in mind, they actually last longer than expected. For harder wearing gloves, check out the brand’s Bravo Glove. These are leather and Nomex, with touch screen compatibility. They are also flame resistant:

The PIG Bravo FR gloves are currently worn by various US Special Operations forces across the globe. For those who need a fire resistant tactical glove option and already love the fit and feel of PIG Alpha gloves, the Bravo FR glove is the perfect kit addition.

Another feature I really like about my Alpha gloves is that they are 100% synthetic and as such are washable. The palms are composed of Clarino, which is a synthetic suede leather. That means you get a good grip and fit but you can also wash the gloves! I don’t know about anyone else, but my gloves smell of bacon after a while – or to be more precise, those bacon flavoured corn snacks, Frazzles.

Back to July 2016 and the debut of PIG’s new glove, the FDT Delta Utility. This glove isn’t meant to replace the Alpha and, in fact, the Alpha looks positively burly in comparison.

The Delta is stripped back to the bare essentials and just when you thought the Alpha’s dexterity couldn’t be bettered, the Delta comes along and aces it ever so slightly. And that’s down to the Delta’s lean construction.

The Delta is a very much simplified glove. No padding/ballistic nylon on the knuckles, no velcro at the wrists (it has spandex instead); bit it still features a short cuff, synthetic suede palm (this time with siliconized PIG logo grips), bar-tacked pull loop, ventilated back and tailored, ‘rolled’ fingertips – which is something I always look for in a glove.

One of the things I like about the presentation of PIG gloves is the hog logo. The Delta features an absolutely huge one on the back; a back which is even better ventilated than the Alpha, down to the absence of padding/ballistic nylon.

So, the Delta is a glove which shooters can use, but it’s not just for shooters. That’s why the gloves are also touch screen sensitive – and this really does work. Two of the pictures I’ve included (ones showing a single glove, obviously) were taken with my phone, one-handed, wearing the Deltas. It’s also really easy to get stuff out of your trouser pockets with these gloves, or do your laces up.

I was surprised just how much excitement there is about these gloves. Not because they’re not awesome but because, well, they are ‘just’ gloves. However, I’ve heard from Tactical Kit that they are already selling really well:

…over half the stock gone already!

When I put some pics up on IG earlier, I heard a few quesions about sizing. So if that’s what’s stopping you from taking the plunge, SKD has a really useful sizing chart on their website which I’ve reproduced below: 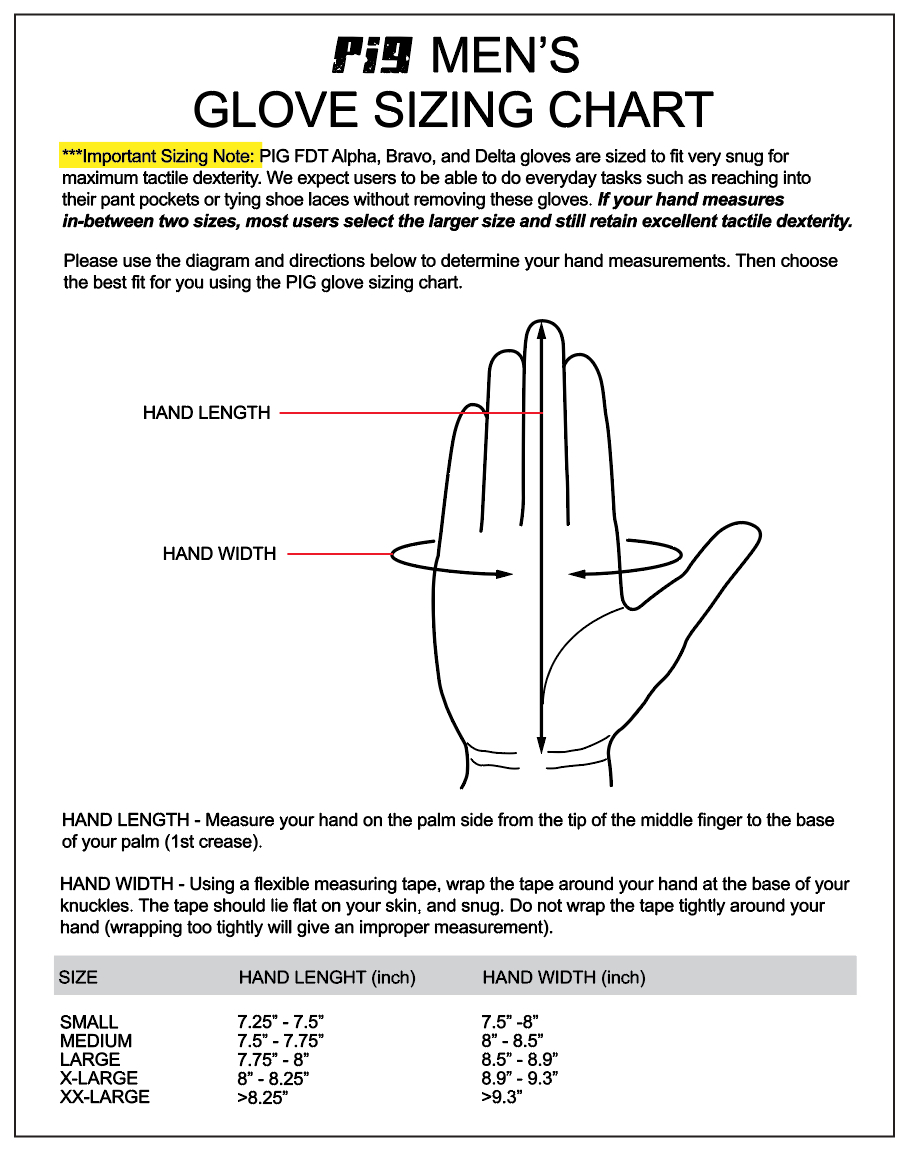 Clearly, sizing is a hugely personal matter but these instructions work for me.

As you may be able to tell, I’m in love with these gloves and on first impressions they are unbeatable for my uses. I will, however, report back when I’ve used these gloves for an extended period; using them for the varied duties I have in mind.

Again, massive thanks to Ian and all the guys at Tactical Kit – PIG’s representative – for providing my review sample. I don’t solicit free swag, so when someone offers to flow something my way it’s greatly appreciated; particularly when the item is something I’ll actually use.