It was probably a good two years ago that I came across an interesting photograph on one of the UKSF impression groups on Facebook. It showed an H&K G3 variant that I was unfamiliar with. Not only that, but it was dwarfed by the big SFSG Para kneeling with it.

Some of you who know me will know that I hail from Africa.

Well, I used a few FMP manufactured G3’s out there in the 70’s. I grew quite fond of them, so when a video emerged of a prototype WE Gas Blowback G3 being test fired I had to know more.

I already have a pair of WE ‘Apache’ MP5’s and they are great little shooters. I hoped that the somewhat sluggish performance of the WE G3 in the video would be sorted before it entered production. While sleuthing around, Gaz from Red Wolf mentioned that VFC were also bringing out a fully licensed G3 in the near future; and that it would have greater compatibility with real G3 parts.

My interest stepped up gear.

I  bought my first VFC G3 not long after they arrived in the UK. Gaz had sent me a few pics of his with various items of genuine furniture fitted. So, I got onto Zib Militaria in Germany and ordered myself a full set of genuine green surplus furniture.

It fitted a treat. I was loving shooting my ‘Full Rhodesian’ G3. VFC, it seemed, had got this one right. Not long afterwards Gaz sent a short vid shooting his G3, with a sliding stock, short dot scope and a Harris bipod. The latter was mounted to a RIS handguard.

Very cool, and different. It reminded me of that photo of Untamed Dave I had seen a while back. 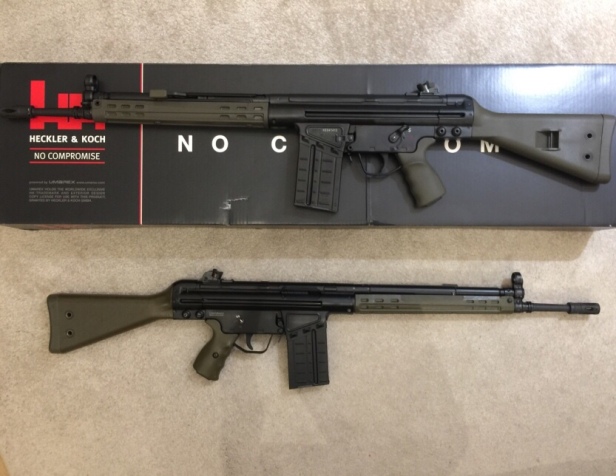 I started more detailed research. Untamed Dave’s weapon turned out to be an H&K G3K A4.

I started scouting for parts for a possible project. After a fruitful search of Zib’s piles of stock, I found that many of the bits needed were reasonably priced and available; but the two B&T RIS rails were not so easily sourced. Gaz from Red Wolf again came up with the goods. He pointed me in the direction of a militaria dealer in the UK with the correct front rail in stock at a very reasonable price – and another dealer with a well priced G3 sliding stock.

I snapped up both, and the Untamed G3 project was on!

I bought a second G3 from Land Warrior Airsoft. I then placed an order with Zib for a lot of parts and took a deep breath.

Before even firing it, the first thing I did was strip down completely the base weapon and put aside the parts I had no need of. I then started to trial-fit and measure the B&T front RIS hand guard.

Eventually, happy with my research, I marked and cut out a 60mm section of the upper Cocking Handle Tube. Then, after battling to find someone in the Airsoft world to TIG weld it together for me, I had a mate called Chad tackle it. He fabricates custom motorbikes for a living.

I’ll not pretend otherwise: chopping up my brand new, bloody expensive toy and taking it to a mate who really didn’t ‘get’ what I was doing scared the crap out of me! I needn’t have worried. 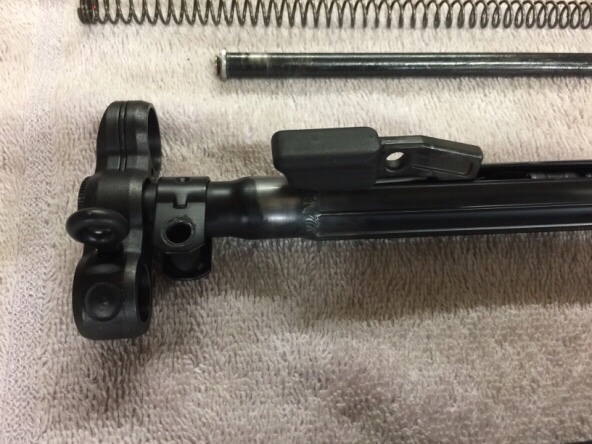 Next up was to get the barrel sections shortened and to make a flash-hider for the build.

The flash-hider proved extremely difficult. To this day I’ve been unable to find out any details on the model and manufacturer; though it seems it may be an unlisted H&K product.

With two grainy photos to go from, I found an HK416C Flash Hider made by VFC. This seemed to be a reasonable starting point. I sent the whole lot off to Jim at LC’s Engineering Outpost, with sheets of instructions and photos.

We didn’t get it right straight away, mostly thanks to inadequate detail from me. That said, after two tweaks, it was spot on.

Finally, with all the bits in place, it was time to assemble them. Also, just as important, I needed to ensure that firing it was as good as – or better than – a stock VFC G3.

First off, the recoil spring and buffer spring on the VFC platform is shorter than that on a genuine G3 – and obviously much softer. Having looked at options with Gaz and discussed what he had done with his, I decided to have a crack at retaining the H&K recoil spring guide on the sliding stock, and shortening it to operate the VFC Bolt.

My first version of this used the VFC recoil spring and worked fine; but even with relatively short bursts, I found that cool down soon led to the Bolt not going fully into battery. This, coupled with my not being happy with how soft the cocking action was (compared to a real G3), led to me having a look at using a shortened section of genuine recoil spring.

After a few minor adjustments this solution has been a spectacular success! The cocking action is now much more realistic and the shooting experience is crisp, snappy and as realistic as one gets with a Gas Blowback Airsoft weapon. 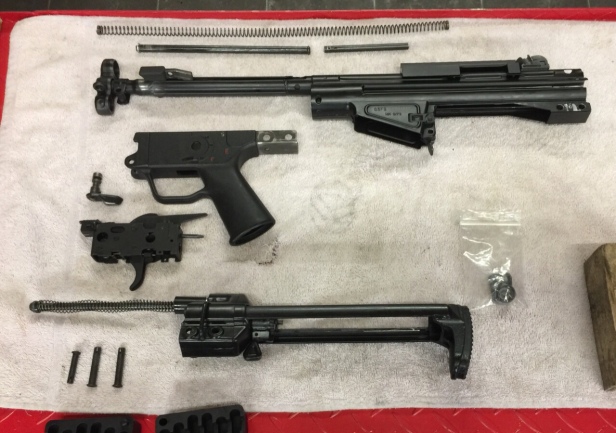 A real cocking handle assembly was modified and installed in the cocking tube, as was a cocking tube end cap of the correct type.

The 1:1 nature of the VFC G3 meant that the Navy Pistol Grip group (required for the build to be accurate) fitted straight on without modification. Also, it readily accepted the VFC Trigger Group while using a genuine H&K selector from Zib Militaria.

I also sourced a genuine rear sight assembly. This bolted on without modification. 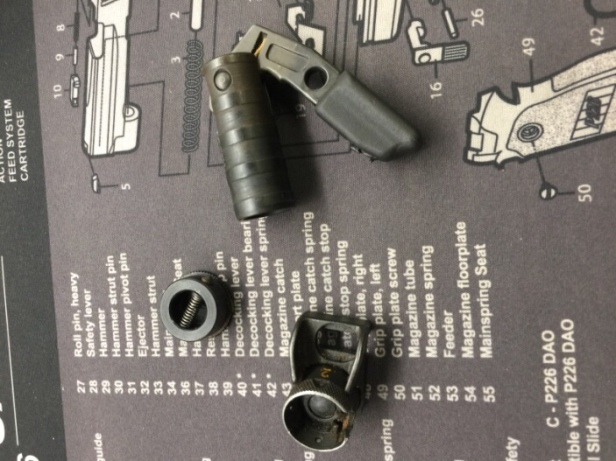 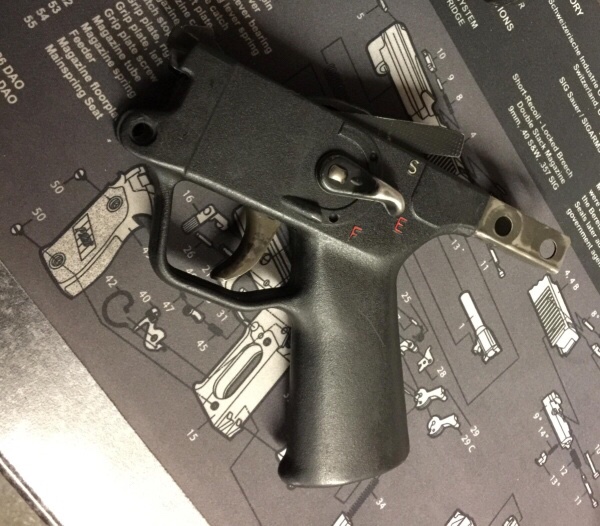 I soon realised that the front Brugger and Thomet Picatinny Handguard was putting significant strain on the cocking tube to which it mounts; breaking the tack welds that hold the mount in place. So it was back to Chad to have the mount secured with additional welds.

(I would imagine that this is something that may well have needed to be done on genuine G3s mounting this rail, though I cannot verify this).

Accessories looked easy to sort out to match those used by Untamed Dave. However, it wasn’t all plain sailing! 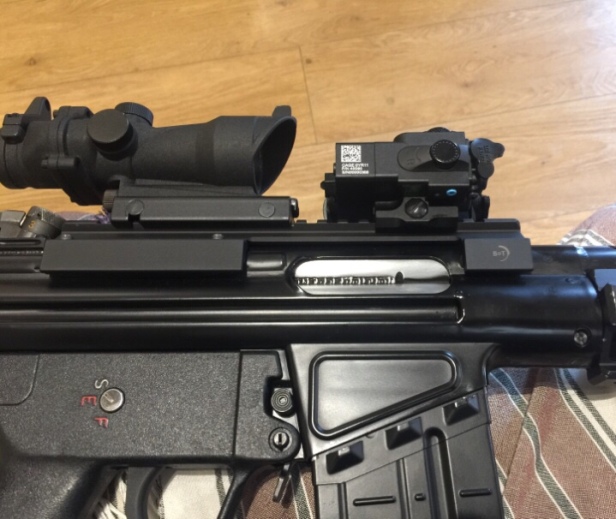 It’s been quite a journey, but the result has been worth every penny spent and every roadblock I’ve come up against getting there.

I trust it’s a fitting tribute to the weapon carried by a soldier who has served his nation and comrades in Afghanistan, endured the ravages of PTSD and now campaigns relentlessly for PTSD awareness.