In my universe, the UMP 45 (less so the 9mm variant) has always been the design crossover between old-school submachine gun (SMG) and ray-gun (not in every day use, yet, but definitely on its way).

HK leapt forward by a generation and came up with a military SMG, the likes of which had never before been seen. Back in the early days of my airsoft career, I owned a G&G UMP with 4 mags: hicaps containing 500 rounds each. That was 2000 rounds on my belt…don’t judge me, we all have a journey of learning to accomplish 🙂

Fast forward about 9 years and I am the very happy owner of two custom-built PTWs.

Here’s one – an XM – which you can read about here. 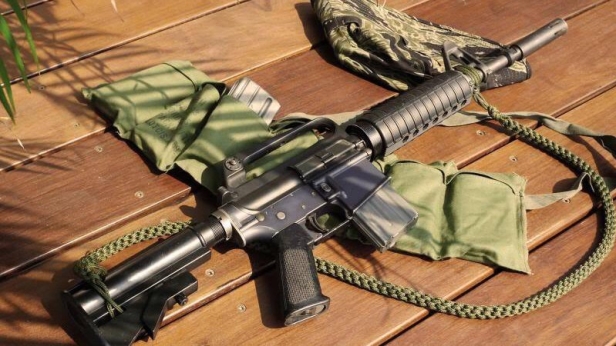 The XM has always been, and always will be, my favourite rifle: lean, mean and retro.

The M4 (below) came about when I accepted the notion that design had moved on; and being able to compete in a CQB environment demanded a more purpose-built iteration, despite being based on the same platform. 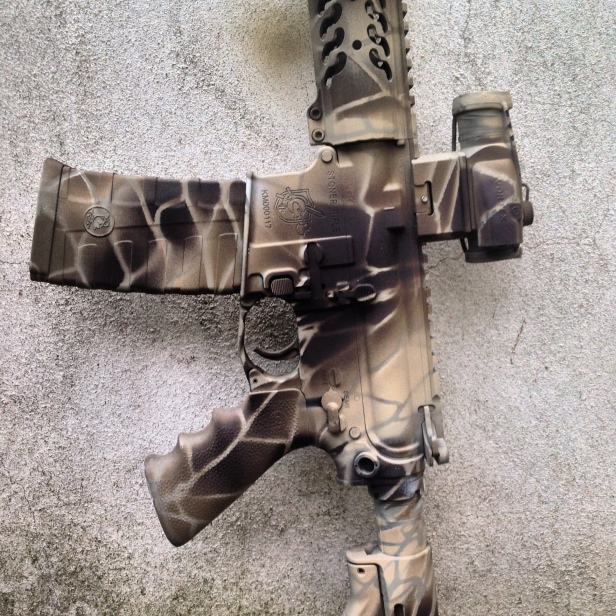 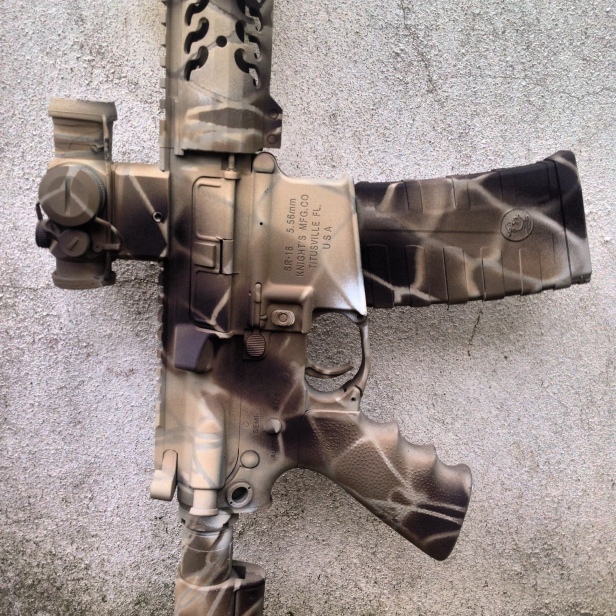 The third PTW I owned – the M16A1 below – went to my good friend Ben. More of him later. 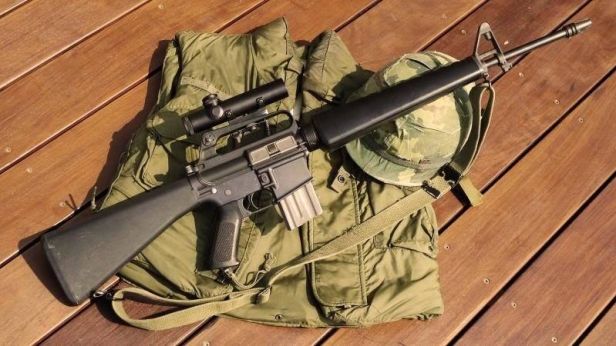 Fast forward a little further and most other non-PTW AEGs have disappeared from my gun cupboard through lack of use.

I own a PTW-based Sterling SMG (the mags have TW5 inners), plus a Stoner Mk 23 Mod light support weapon as my ‘Nam backup (more about that in my ‘Dustoff’ report to come).

So it was time for ‘something different’.

I wanted a PTW-based UMP for use in a single-shot, decent hit-taking, low-cap CQB environment. My research led me (via GBB bodied, PTW-gearboxed custom specials) to Systema’s MP5 – the TW5.

Could it be made to provide UMP handling?

Usually at this point in people’s PTW fantasies, Systema guru Tackleberry makes an appearance. Several discussions later and we had a rail that was the complete opposite of what an MP5 front end normally looks like. 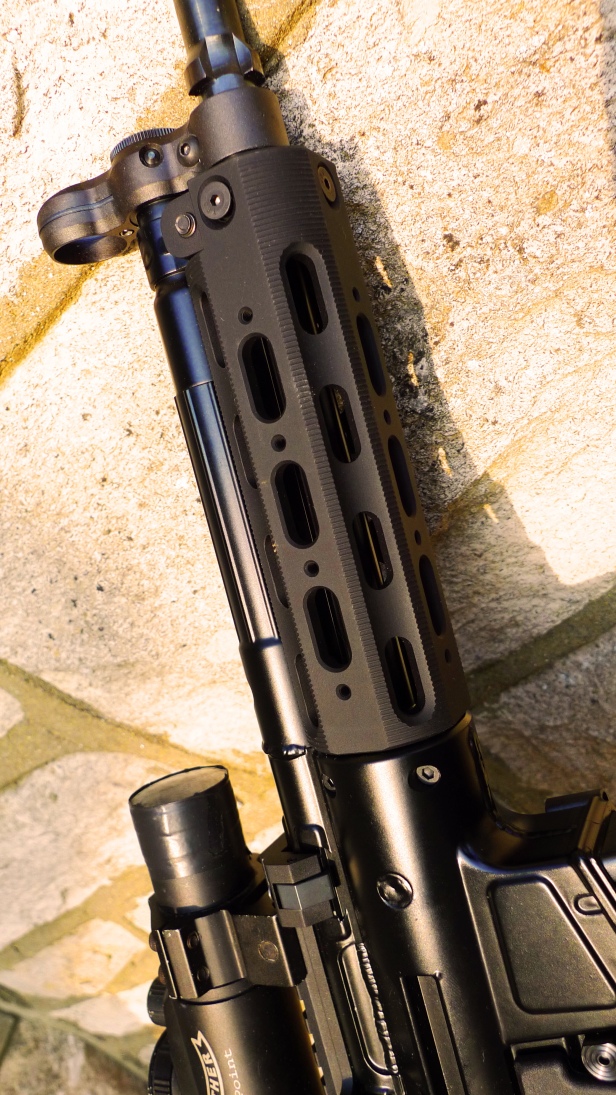 My friend Ben, who ordered his TW5 at the same time as me, went for exactly that iteration: the 1980s SAS classic, and what a fantastic SMG he ended up with:

Still, despite the rail my TW5 was still too much of an MP5 and not enough UMP; until my beady eye spotted a US website selling RS UMP stocks for MP5s (yes, way!) 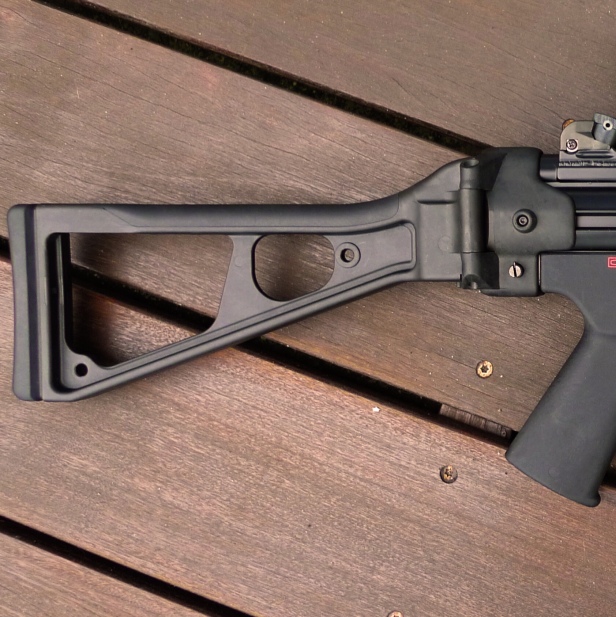 Tac got hold of one and managed to make it fit. Although Tac doesn’t swear, his comments about the amount of work it took to make the RS stock fit the TW5 body must have made him reconsider 🙂

The result – I hope you will agree – breaks the mould, whilst remaining securely anchored to the HK tradition of Teutonic design and modern materials.

I will let the photos speak for themselves and just add a few words about handling and peripherals:

– I experimented with a stubby front grip but rejected it immediately. It did not improve handle and really did look out place. Handling matters, and so does aesthetics.

– A suppressor would be nice, but not the original 80s one as it just isn’t pretty and would turn the TW5 into a long gun. More research to be done, especially regarding fitment to the original flash hider.

– Don’t use the SMG with the stock collapsed – this is for transport use, not for shooting. Looks great sitting on your Landy seat, though: 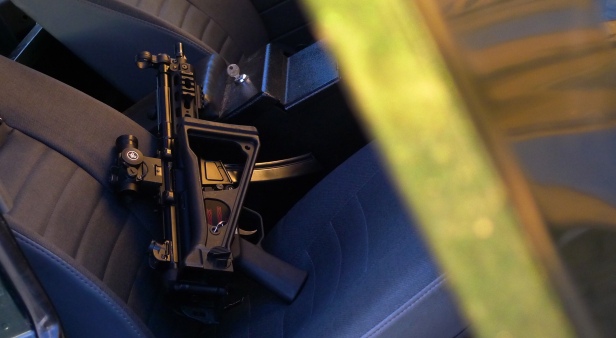 – Although reasonably heavy, the TW5 never feels too much as it is well balanced.

– The form factor of the upper means that you can line up the iron sights (beautiful, aren’t they?) whilst wearing eye protection; and the slight rising action of the sight clamp makes it even easier. Think HK416 compared to M4.

– 40 round magazine capacity is plenty for single-shot use. Just choose carefully the site you are going to use it at.

– Don’t bother using full auto, it is way too fast. If you get into trouble, 3-round burst will empty your mag quickly enough.

– Being left-handed, I got so used to hitting the mag release button with my right hand on my CAR15 that the MP5’s ambidextrous controls are unnecessary but nice. I switch to ‘fire’ the moment the game starts anyway.

– It was fun setting up a new rig to get the best out of the platform. It made me re-think how a rig should work and updated my knowledge on what kit is available out there these days (thanks, Rich of The Reptile House, for your treasure trove of knowledge). 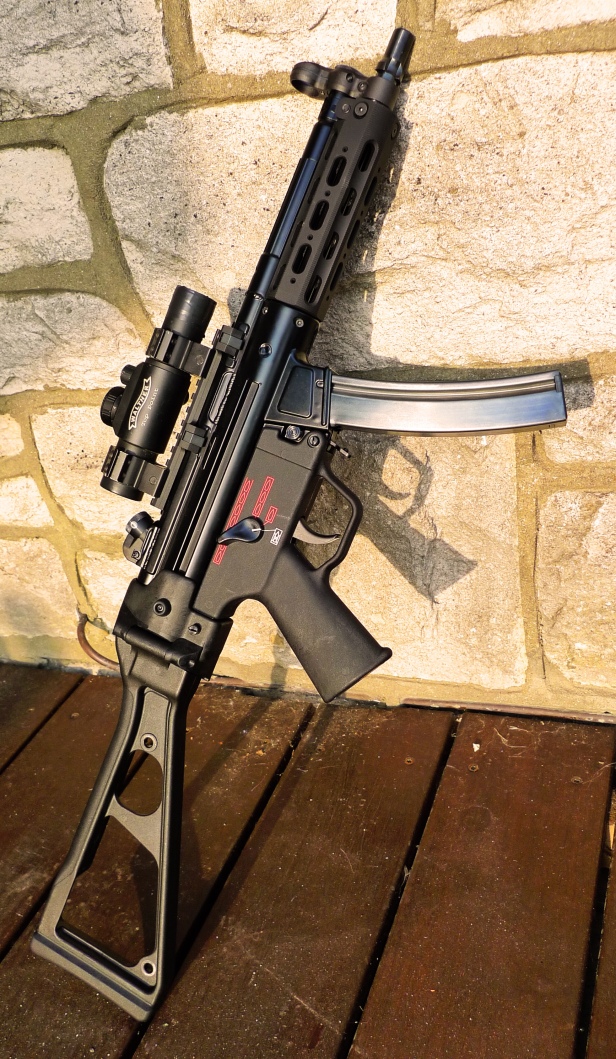 So, in conclusion, I need to compare my rifles to each other.

The CAR15 is untouchable and I will therefore leave it out of this. It has an unfair advantage because of my emotional involvement. A bit like an old flame will always be ‘the best’.

My TW5 keeps up with the M4 in close-quarters – no contest there – but I haven’t tried it in a medium-to-long distance environment like Longmoor or Copehill Down. It is just as precise as the M4, but its shortness and heavier weight make it feel totally different.

Previously, I have been tempted to switch to the M4 for the afternoon and enjoy its lack of weight (aluminium barrel and receiver) but recently the TW5 has stayed with me all day.

Not too extensive as there are no aftermarket receivers available.

– Red dot sight (my trusty Vortex Spark 2, although a Vortex Razor would work nicely here, too. As you can tell from the photos, I have also been experimenting with heavier sights, which I prefer as it gives it that chunky, military look)