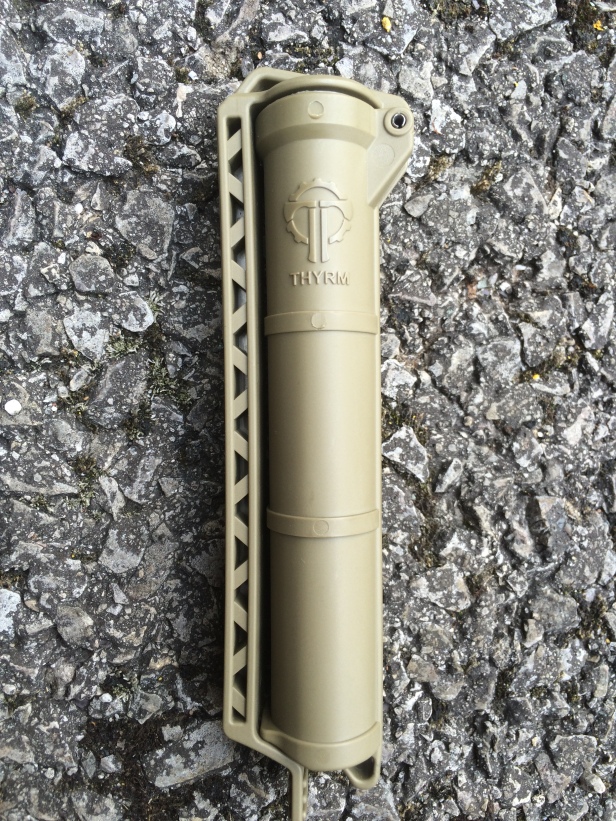 The Cell Vault is a gear-attachable, tough, water resilient container. But it isn’t as limited to carrying batteries as its name might suggest.

I got my Cell Vault from Tactical Kit after a conversation with Ian, the MD. Ian persuaded me that I needed one. Turns out that I do! I may actually need two…

It also turns out that THYRM is one of the brands Tactical Kit looks after and there’s a great write up about them here. THYRM is a new brand to me, so it made interesting reading. 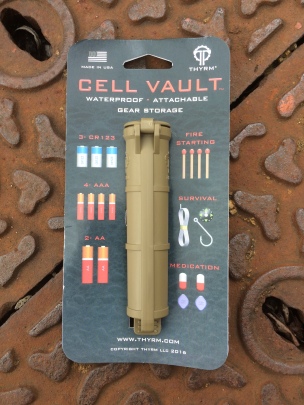 The Cell Vault comes attractively merchandized, with a card header depicting a number of possible uses.

My first impression was that it’s well made, out of the kind of high quality polymer which Magpul and Mission First Tactical use on their AR15 stocks and other tactical accessories.

It’s clear from the outset that the Cell Vault is aimed at the tactical, EDC and Prepper markets. It’s available in colours like FDE (depicted), Urban Grey, Olive Drab, etc. There’s also a Rescue Orange option, which I think would be particularly useful if you chuck a Cell Vault in a bag of other stuff. Easy to ID it amongst the clutter.

And you really can chuck this thing about, because it’s highly robust. 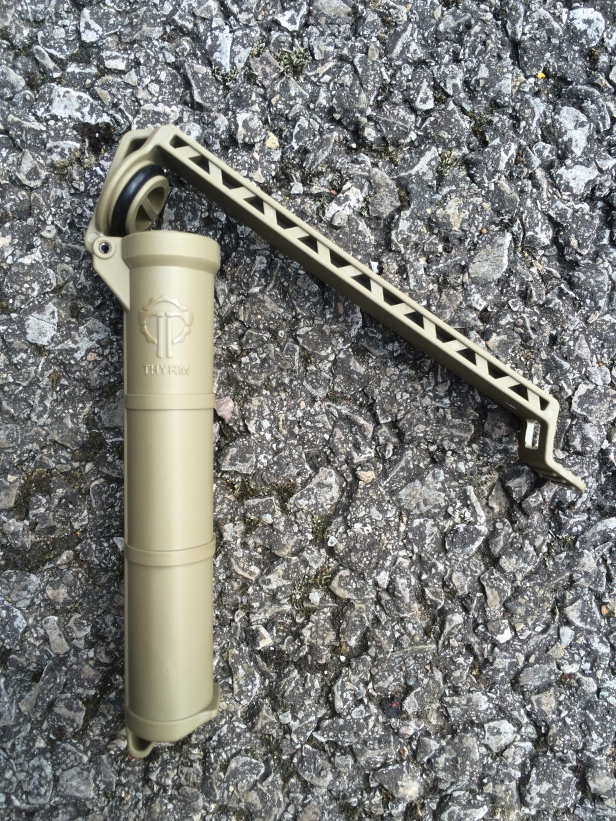 Above, you can see how the Cell Vault hinges open; and the O-ring at the top of the unit. The compession of this O-ring is what keeps the contents dry and clean, when the hinge is fully closed and locked shut at the base of the Cell Vault.

You can also see how strongly reinforced the attachment clip is.

I tested water resilience first, with my limited resources: a big sink full of water. 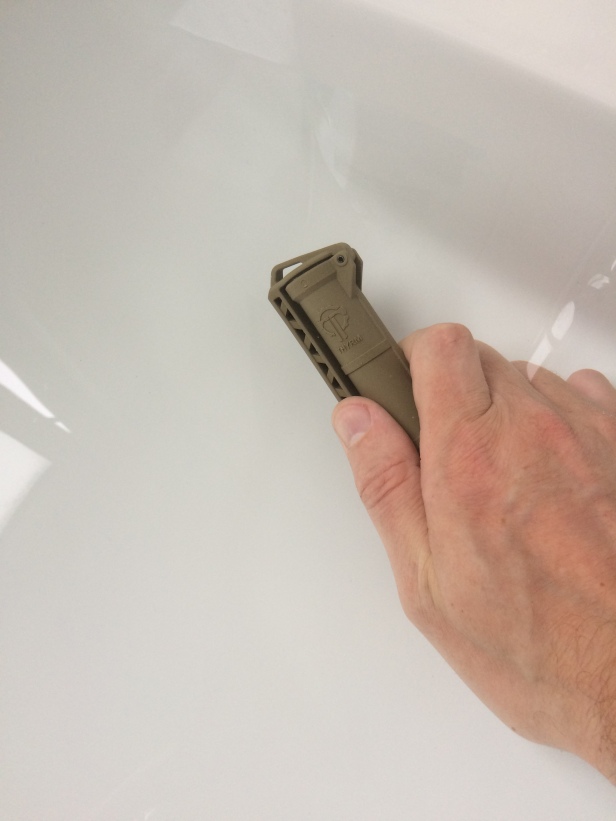 To be honest, I don’t expect to take the Cell Vault swimming, but if I’m going to carry it external to my gearz, I need to know rain won’t get in. And on the strength of my immersion/agitation test, I don’t think it will. 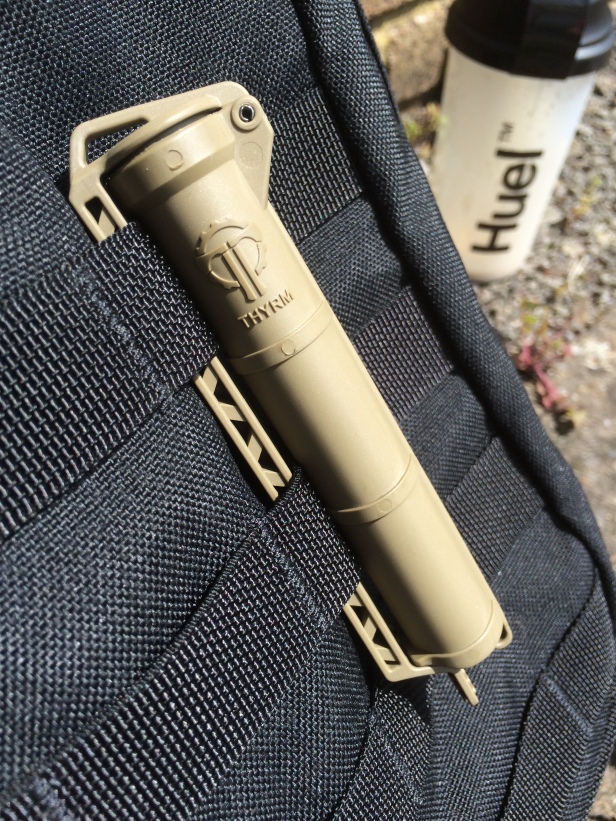 The Cell Vault has been designed with MOLLE in mind, as well as belts and other load bearing systems. In the pic above, I’ve attached it to my EDC GoRuck GR2. The Cell Vault only uses one PALS channel with room enough to spare either side of its body, which allows pouches to overlap into its space.

So, it’s highly discrete whilst optimising the space it does use. 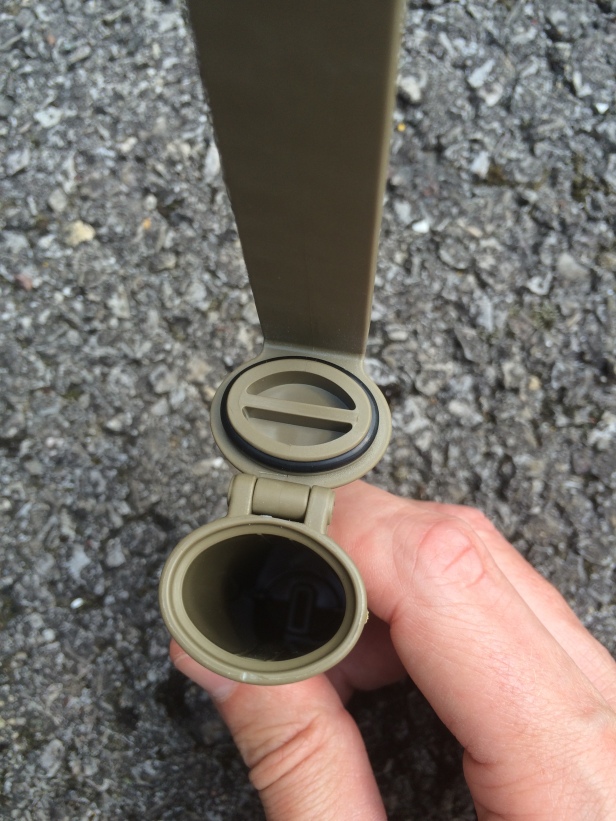 One of the really clever things about the Cell Vault is its oval cross-section. This not only makes it strong, but allows a CR-123 battery to be retained inside until the sides are squeezed. Then, out it comes. So you can poke a CR-123 in, then load the rest of the unit with matches or whatever. When inverted, only the matches will drop out which helps manage fumble situations. If you want the battery too, just give the unit a squeeze on the pointy sides of the ellipsoid, over the position of the battery.

The pic below shows some batteries pathetically failing to fall into my eye, as I lift the Cell Vault to the sky (that’s a good thing!)

If I put pressure on the sides, over each battery in turn, I’d be in trouble: 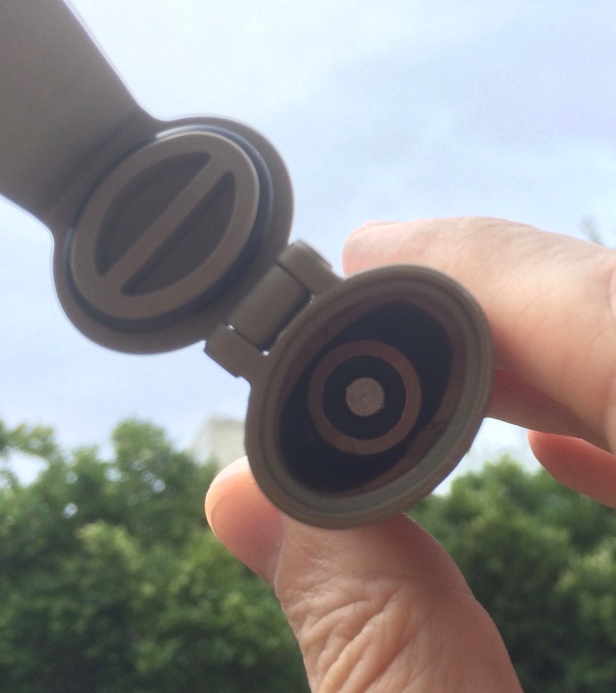 Another great design feature is the way in which you can keep the Cell Vault attached to MOLLE or belt, yet still open it to retrieve items. It hinges open, until fully inverted, as below. 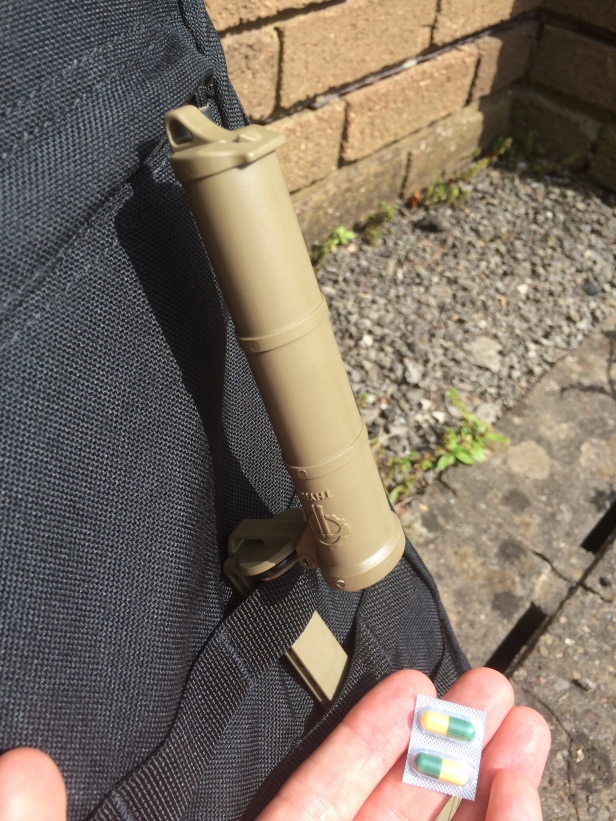 If you do wish to detach it completely however, it’s not a chore.

As for capacity, you can get more in it than this, but it’s an example: 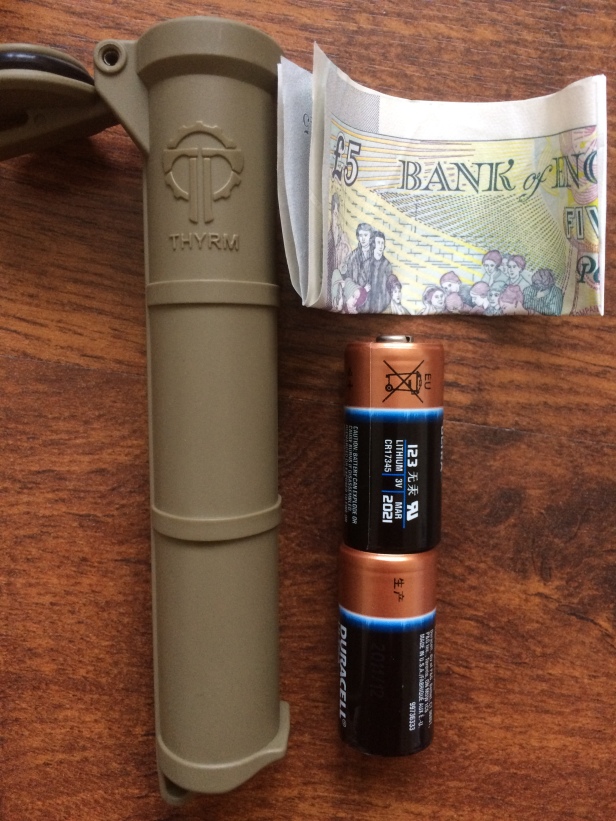 For those of a diagrammatic persuasion, I robbed this pic from THYRM’s website: 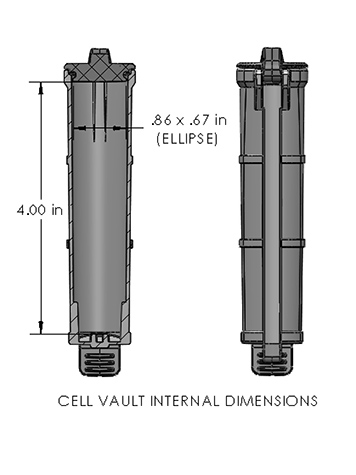 What most impresses me about this product, aside from its clever design, robustness and high quality polymer is I didn’t know I needed one until it arrived. Big thanks to Tactical Kit for fast shipping, as usual.

Sometimes I think manufacturers come up with names for products before the designs; almost like physical backronyms. However, while THYRM’s name for this product is a clever play on words, it represents something much, much more.

Lastly, check out THYRM’s video about the Cell Vault. Until I saw this, I’d been saying the company name wrongly. The video has since compelled me to put on an American voice-over accent every time I say “THYRM”, because it sounds so cool that way: