This blog was intended to be a short one about HAO’s new CAG release – just a heads up, really.

There are a few pics of the new kit interspersed in the text, which I pinched from Miguel and Marco from HAO – thanks dudes!

However, there’s not much left for me to say about the quality of HAO’s receiver sets for PTW and I got thinking about how far they’ve come as a brand.

When I first heard about HAO, I was dismissive.

In the background there was some noise about HAO being Eagle Eye’s original OEM. HAO supposedly manufactured the EE416. I owned the latter for a short while, before upgrading to an SGT HK416D.

To be honest, I didn’t really care who manufactured what. I cared – and still care – about decent access to the best quality gear we as consumers can buy.

Despite all the haters, HAO went on to blow everyone out of the water with the second iteration of their HK416 PTW set. I was having a break from the blog at the time, so it was a big surprise when I came back to it and a new HK416 PTW king was in town.

I think amongst many of my PTW friends, the big turnaround in opinion happened when HAO gained the professional endorsement of Tackleberry.

However, before that, my first foray into HAO-world happened when I purchased and reviewed their HK416 quad rail.

It was sublime and you can read that review here.

A little later, I purchased their HK416 fire selector – another great product – which you can read about here.

These were baby steps for me, building trust in a brand I did not know.

Next came their SMR, which really sealed the deal.

You can read what I thought about that here, but it’s still the best SMR clone on the market and it’s unlikely to be bettered – it’s so close to the RS (and I know this because at the time I had the RS to hand to compare it with).

In fact, I was so effusive about this rail that I decided I needed a reality check – courtesy of my good friend Tactical Optician. You can read his views, here.

Then, later in April 2016, I was happy to report that Tackleberry had entered into the aforementioned business relationship with HAO.

For me, this represented an incredible synergy.

Tackleberry has dominated the PTW world for a decade. Anyone who has even a tenuous grasp of PTW history will know it was he who solved a number of significant issues with the platform – including the disastrous 2008 motor issue – which helped turn the term ‘Tackleberried’ into a rock solid guarantee of quality; and created a whole new knowledge-based airsoft business model.

At the time, airsoft technical knowledge was largely open-source – shared amongst users on forums. In light of this, Tac’s business model was not well received by some in the community. How dare someone keep technical knowledge to themselves? And profit from it!

Well, times have changed and the proof is in the pudding. There are now any number of Tackleberry wannabees, equipped in the dark arts of any number of platforms. And while others have set out to directly challenge Tackleberry’s dominance in the PTW arena, he is still the only one who drives a Ferrari.

But Tac’s influence didn’t stop at righting fundamentally flawed motors (the 2008 model PTW’s biggest issue). He invented a whole new range and level of performance enhancements – including the hop mod. The latter brought a degree of consistency and accuracy to the PTW platform which until then was only enjoyed by those dedicated AEG fettlers who, by trial and error, had worked really hard to get the best out of their TM-style hops.

Suddenly, if you were a PTW owner, you could hand over some cash and enjoy that level of performance without lifting a finger. So, in the PTW world, the term Tackleberried also replaced “upgraded”.

Since 2010 I have bought a number of PTWs. All of them have been built by Tackleberry and I have never regretted recommending his services to others.

So, as I prepare to receive another build (my forth new PTW, although it will be my second existing PTW) there was never any doubt about who I would be buying from and who I would want to build it.

Tackleberry has his own Facebook group, which is here.

P.S. Don’t forget that in the HAO CAG kit, you have to remove the sling loops from the gas block – ghetto style – to fit the SMR; just like the real deal. That part doesn’t happen at Oberndorf. 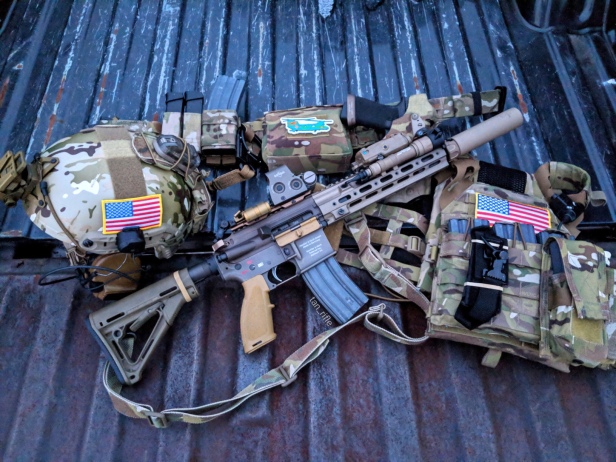