First and foremost I want to give a huge thanks to Rich for inviting me to contribute to his spectacular blog. I’ve been a huge fan for a long time and I’m extremely honored to be a part of the fabled Reptile House Blog.

I’ve always loved the HK416 platform. Ever since I first delved into the hobby my ultimate dream rifle was the HK416. Almost two years after I started with this hobby I finally got my dream gun and it’s been a rollercoaster ride ever since.

That rifle did everything I could have ever asked it to do and then some. However, lust got the best of me and I sold the rifle to fund another project build I had in mind. But when I thought I was done with the 416, it wasn’t done with me.

Shortly after I sold the first 416, I scrapped the planned build and bought another HK416 instead. I quickly fell into the habit of selling my HK416 then quickly buying another one after realizing how much I missed the platform.

It was the gun that I always came back to. Which led me to this build…

After going through a total of seven HK416s I’ve finally found The One.

The desire to embark on this build first started when I laid eyes on some leaked photos of a particular Special Operations Cool Guy unit using the tan 416 in West Africa (you all know the one). As more and more photos surfaced online of the tan 416 my love grew more and more. It wasn’t until I got the chance to see my good friend’s (upp3rz_d0wn3rz) personal build in person that I knew I had to bite the bullet and dive head first into the build.

The two most recent additions to the build are a VISM 1-x24 Short Dot and the new HAO 556 Dummy Can.

I actually reached out to Rich from the Reptile House before making my decision to purchase one seeing as he had the first insider knowledge on them.

While it does come with a hefty price tag for a dummy suppressor the quality is second to none. 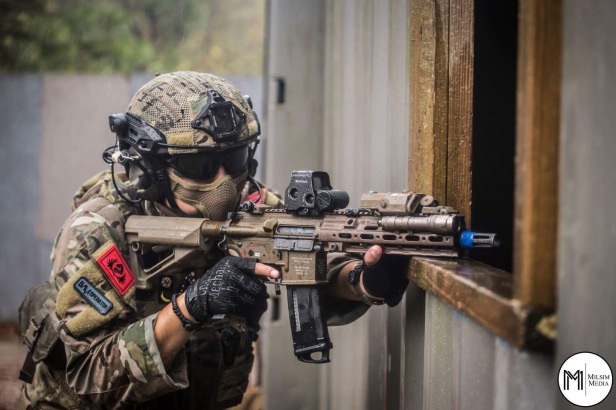 Now I know the short dot isn’t “proper” for a stitch bitch impression, but I’m in no rush to spend some serious dough on a Vortex Razor for a BB blaster. Not that I condemn anyone who does, I just believe this scope will work just as well for what I require it for.

I’m am however, debating on Cerakoting the scope burnt bronze just to see how it’ll look – so stay tuned for that!

I’ve never really toyed with a short dot so it’ll be exciting to see how it holds up. So far I’m in love with this current setup and doubt I’ll switch back to what I originally had it any time soon.

I’m still debating replacing some replica accessories with real ones but funds are being focused elsewhere at the moment, so for the time being that will be put on the back burner. All and all this has been my best build to date. I love everything about it and the tan just stands out so well in the sea of black rifles. 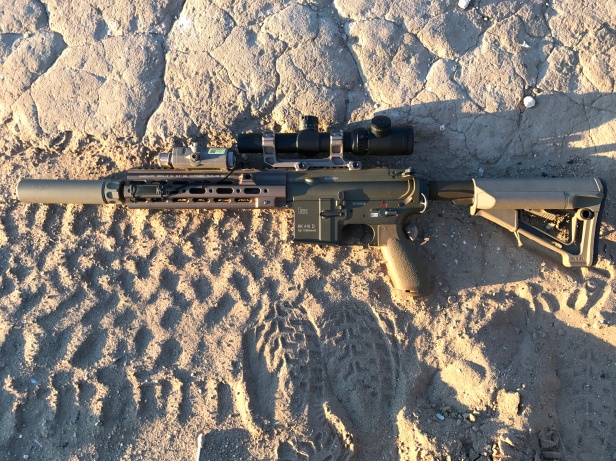