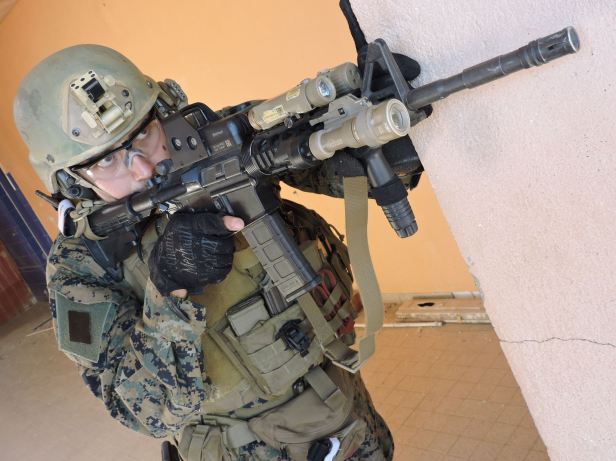 I spotted a pic on DEVTSIX yesterday, which really impressed me.

I don’t see so many gucci M4A1 PTWs around right now, but it’s an elegant format. I’ve always liked the handling of a 14.5″, but the iconic A-frame fixed iron and classic looks of the M4A1 really set it apart.

The example featured here – by Frenchman Nick Hugeballs (his forum name, I assure you!) – is particularly well studied, because Nick has assembled the parts required to represent several eras.

How cool is that?

Nick is part of 22nd Meu Reenactment Group, based in the South of France.

The group was founded on August 2012 by 3 passionates of the USMC inspired by grunts units Vincent Albe, Jonathan Michel, David Castello.

Quickly they had joined by guys meeting on France Airsoft (Semper Fidelis) Joris Picard, and others meeting by contacts Gaël Marais, Nicolas Rateau the same month of the creation, the others had followed the next months.

From the beginning the group choosing the recon battalions as inspiration for reenactement.

Within mere month of the foundation, new guys joined us. Still now guys had joined the group for few weeks/months. We keep on working hard for show credibles pictures & photos, for good drills … Actualy we are 15 on the group.

The base blaster remains the same – an M4A1 PTW with KAC RAS. However, as per era requirements, the stock changes: four position for 2000-2007 and six position from 2008 to present day.

You can also see how the other peripherals change, according to era, in the pics below.